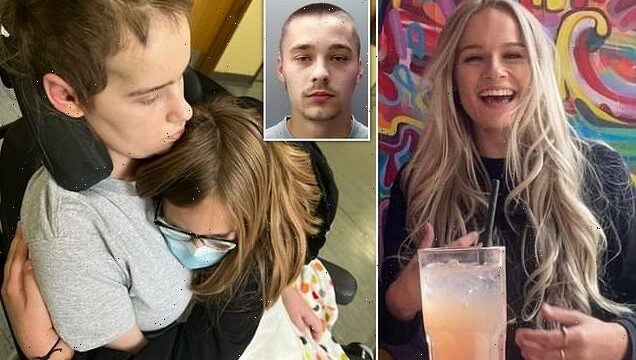 Family of Angel Lynn, 21, who was left paralysed after she was kidnapped by her boyfriend and then fell from moving car raise £150,000 to renovate their home so they can care for her full-time as she continues her recovery

A young woman who suffered catastrophic brain injuries from falling out of a moving van after being kidnapped by her boyfriend is making progress in her recovery, her mother said.

Angel Lynn, 21, was left paralysed and unable to eat, walk or talk by herself following the ordeal at the hands of Chay Bowskill, two years ago.

CCTV caught the moment she was forced into a van by Bowskill and his accomplice Rocco Sansome, in Rothley, Leicestershire, in September 2020 after an argument.

She then fell out of the vehicle, which was driven by Sansome, as it travelled at 60mph, before she was found by horrified members of the public.

Angel’s mother, Nikki Lynn, previously said she was told by doctors to prepare for the worst and that her daughter may never make a full recovery from her injuries.

However, Angel has made much better progress than expected and her family are hoping to bringing Angel home for good as soon as they can.

To do this they need to build an extension for their house in Loughborough, Leicestershire, and they have just received planning permission but now need to raise funds for the project. 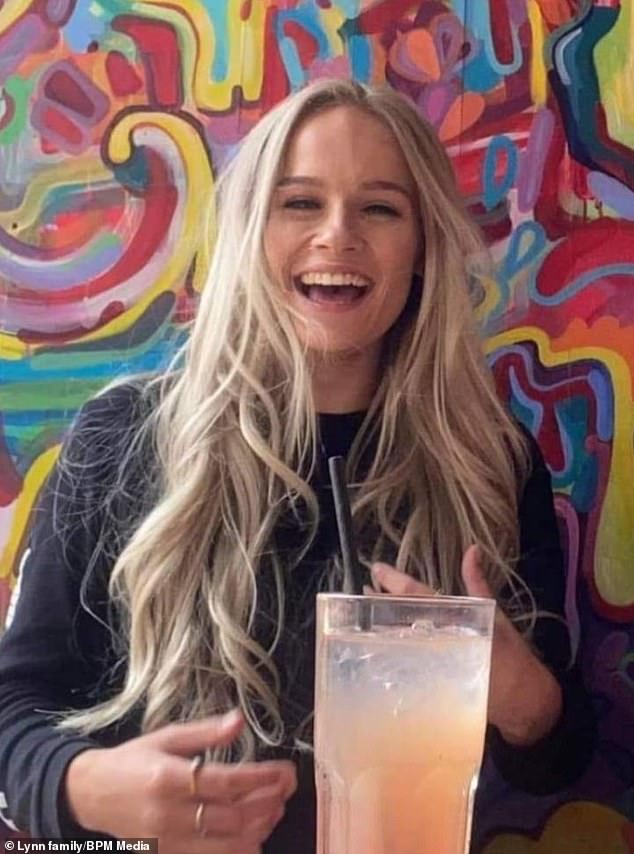 Angel Lynn (pictured before the life-changing brain damage), 21,  was left paralysed and unable to eat, walk or talk by herself after her boyfriend, Chay Bowskill, kidnapped her and she fell from a van at 60mph 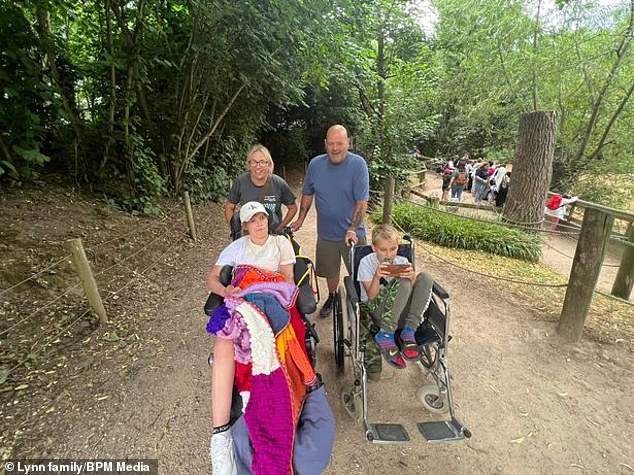 Angel has been recovering well and was recently taken out to Twin Lakes and Twycross Zoo, where she fed the animals 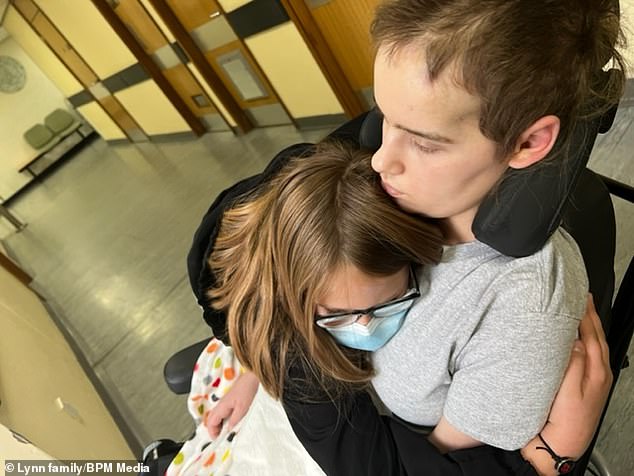 Angel Lynn, 21, who was left paralysed by her thug ex boyfriend after he kidnapped and threw her into the back of a van has been able to hug her mother (pictured hugging sister Kelsie, 10) 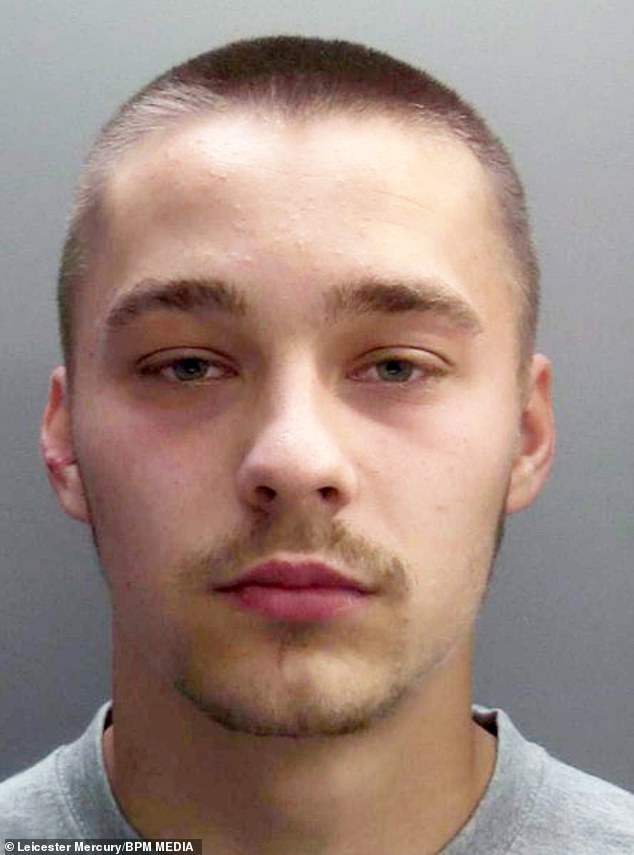 Chay Bowskill, 21 (pictured) was orignally handed a seven-and-a-half-year sentence after being found guilty of kidnap, coercive and controlling behaviour, and perverting the course of justice, but now, senior judges at the Court of Appeal have concluded his original term for the kidnap was not long enough and have handed him four-and-a-half more years

The plans include a wrap-around extension, a downstairs wet room, a medication and laundry room, and a hoist which would be able to transport Angel through to the living room, kitchen and bedroom.

They have set up a crowdfunding page to help with the work – which has already raised almost £150,000 – and are now on the lookout for generous tradespeople who will to donate their services to the cause.

They also hope they will have enough money left to pay for the specialist medical equipment and long term rehabilitation Angel will need.

Currently Angel comes home every day to spend time with the family, mother Nikki said: ‘I pick her up every day and bring her home. She’s doing so much better than she was and we’re just so grateful for the help we’ve received so far.

‘We’ve taken her to Twin Lakes and Twycross Zoo – she fed the animals and she’s even helped me peg the washing out.

‘Angel can write a few things down now too – but not fully. We have a white board and you have to watch what she’s doing as sometimes she can write letters over the top of each other. Other days she writes as clear as anything, I’m so proud of her.

‘Yesterday she even used her right leg to push against the floor, trying to move her wheelchair along. She’s due to have an operation to straighten her left foot and maybe her right as its not been moved for a long time. Then she’ll have two braces made to keep the position of the foot where its supposed to be so eventually we can get her standing’.

Angel’s aunt said the teen’s family have had to become doctors and nurses to provide round-the-clock care, adding that her mother is ‘the strongest person I know’ (Pictured: Angel with her mother Nikki) 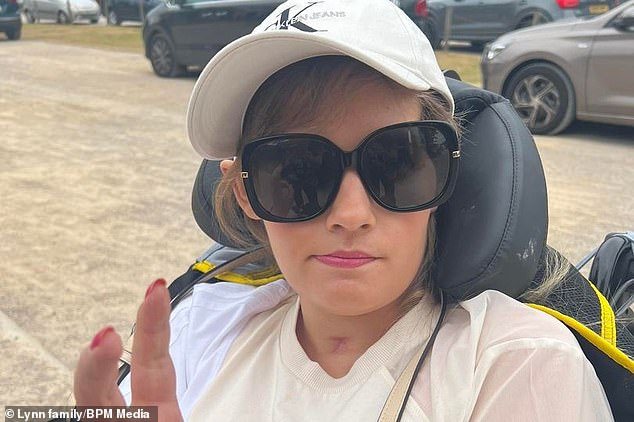 Angel has been recovering well and is now able to write, feed animals at the zoo, move her right leg and help her mum hang the washing

Angel is currently receiving care at the Queen’s Medical Centre in Nottingham and is due to have communication equipment fitted to her wheelchair at the end of August. This will give her the ability to tap letters with her right hand to create sentences and communicate with her loved ones.

While she is still being fed through a tube in her stomach, she has been allowed to lick one ice lolly a week to try and improve her swallowing.

Nikki added: ‘We’re trying it for three weeks, but we’ve already seen an improvement. She chooses the flavours she likes – but last time she wanted Vimto flavour, one of the kids had it so she got stuck with blackcurrant!’.

The family are now on a mission to raise more funds to get Angel home, with a Facebook page set up to request the help of local tradespeople.

Angel Lynn’s Big Build has received an influx of support and an offer of free scaffolding has already been offered to the family. 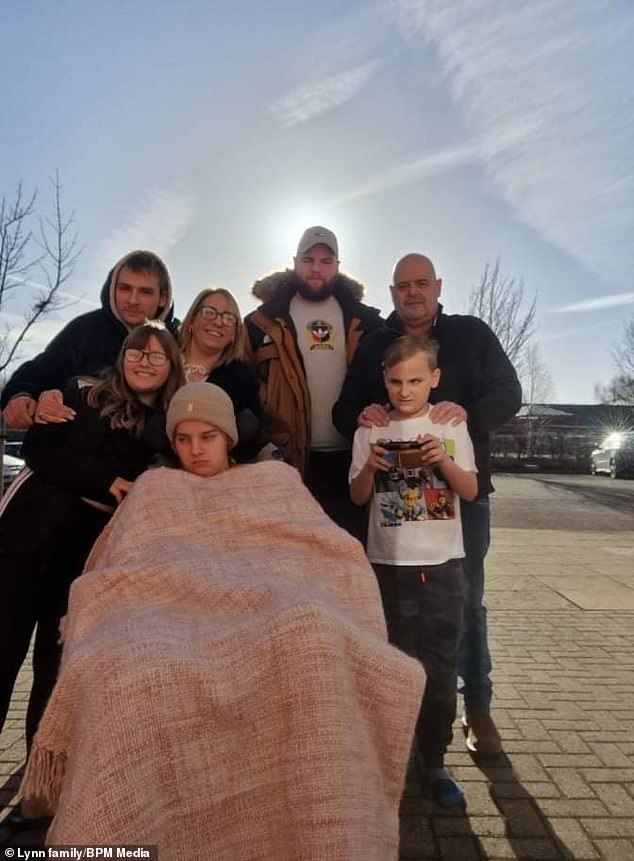 Once the build work has been completed, Angel is set to have a staggered return on the weekends

Nikki said: ‘Angel’s needs are far reaching and extremely long-term and the build has to be very specific. We are so grateful for all the help in the last two years and this is now the big push to get her home in a safe and suitable environment.

‘We’ve got planning permission and now we need tradesman to come and help with the work.’

Once the build work has been completed, Angel is set to have a staggered return on the weekends.

Her mother is going to get trained on how to feed and medicate her daughter and reposition her to prevent pressure sores.

Nikki added: ‘I need to learn how to be her carer. As her mum, I really want to do that for her – she deserves it’.

To donate to the fundraiser, visit: https://gofund.me/2e1fb7dc.