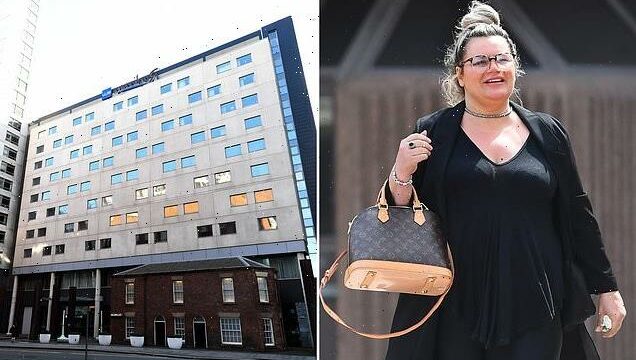 Mother, 48, who was ’10 out of 10′ drunk hurled fire extinguisher like a ‘missile’ from sixth floor of hotel into lobby to ‘scare staff’ after check-in row – causing £220,000 worth of damage

A drunk guest launched a fire extinguisher like a ‘missile’ from the sixth floor of a Liverpool city centre hotel to the lobby below, landing her with a suspended jail sentence.

Ashley Fairfield was rude to staff at the Radisson Blu when she returned after a night out without her room key.

But as staff looked up, the 48-year-old lifted the fire extinguisher above her head and hurled it down.

The ‘highly dangerous missile’ hit a marble staircase before it ruptured and shot across the foyer as it sprayed out dry ice. 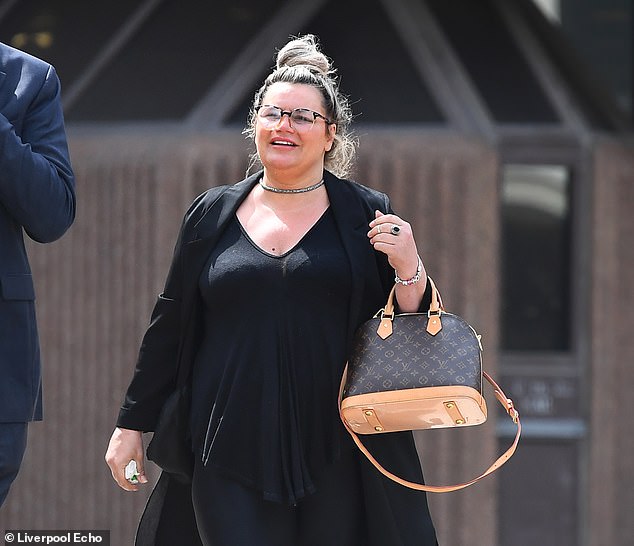 Ashley Fairfield, 48, launched a fire extinguisher from the sixth floor of the Radisson Blu in Liverpool after returning to the hotel drunk

Liverpool Crown Court heard Fairfield drank vodka as she travelled down from Dundee to Liverpool on September 5, 2020.

She went drinking with family members in the Baltic Triangle and later described herself as ’10 out of 10′ on a scale of drunkenness when she got a taxi back to the Old Hall Street hotel.

Judge Denis Watson, QC, said: ‘You drank too much during the journey and once you were here.

‘You were taking strong painkillers – your medication – and you changed from your normal, polite and dare I say unremarkable self to a rude, angry, aggressive and violent troublemaker.

‘The staff of the Radisson Blu dealt with your behaviour with patience and courtesy, as you tried to check in without having your name on the booking and you were short and rude to them. 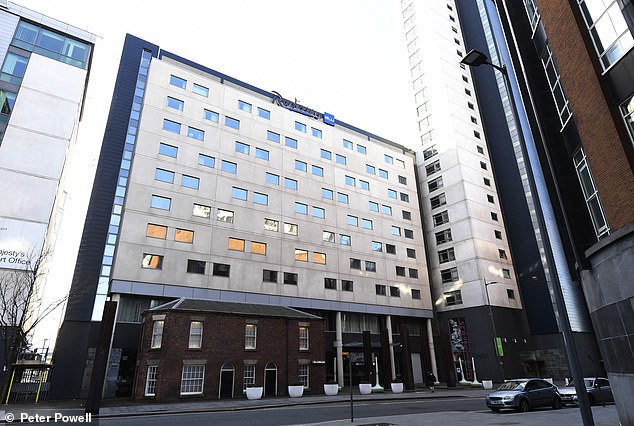 Fairfield first pulled the hand sanitiser unit off the wall and tossed it over the balcony, and then ‘launched’ the fire extinguisher off the balcony, the court heard. Pictured, the Radisson Blu

‘Then, when up on the sixth floor and on the balcony, you behaved disgracefully and extremely dangerously.’

The judge said Fairfield first pulled the hand sanitiser unit off the wall, before tossing it over the balcony.

He said CCTV showed her then taking the extinguisher off its mounting and ‘launching it’.

The hotel manager heard a ‘crash’ and saw the hand sanitiser unit lying on the floor.

Anthony O’Donohoe, prosecuting, said: ‘He went to investigate further and then heard a very loud explosion as he put it and felt vibrations through the floor.’

The five and a half kilo dry ice extinguisher didn’t explode, but ‘depressurised rapidly’ and ‘propelled itself’.

The court heard it ‘span violently’ and sprayed out its contents, eventually reaching the reception desk, as staff and guests looked on in horror.

The hotel said the estimated cost of repairs to the marble staircase and floor tiles was £220,000.

A forensic pathologist said anyone struck by the extinguisher could have suffered a life-threatening injury.

Judge Watson told Fairfield: ‘It’s of course pure chance that no one was seriously injured, for there were people who were in the foyer, wondering what the disturbance was, looking up at where the hand sanitiser had come from..

‘This was a heavy projectile that fell at high velocity and could have struck anyone on the staircase or even if they were in the lobby.’

Police arrived and arrested Fairfield, who said: ‘It wasn’t me — I’ve been in my room.’ 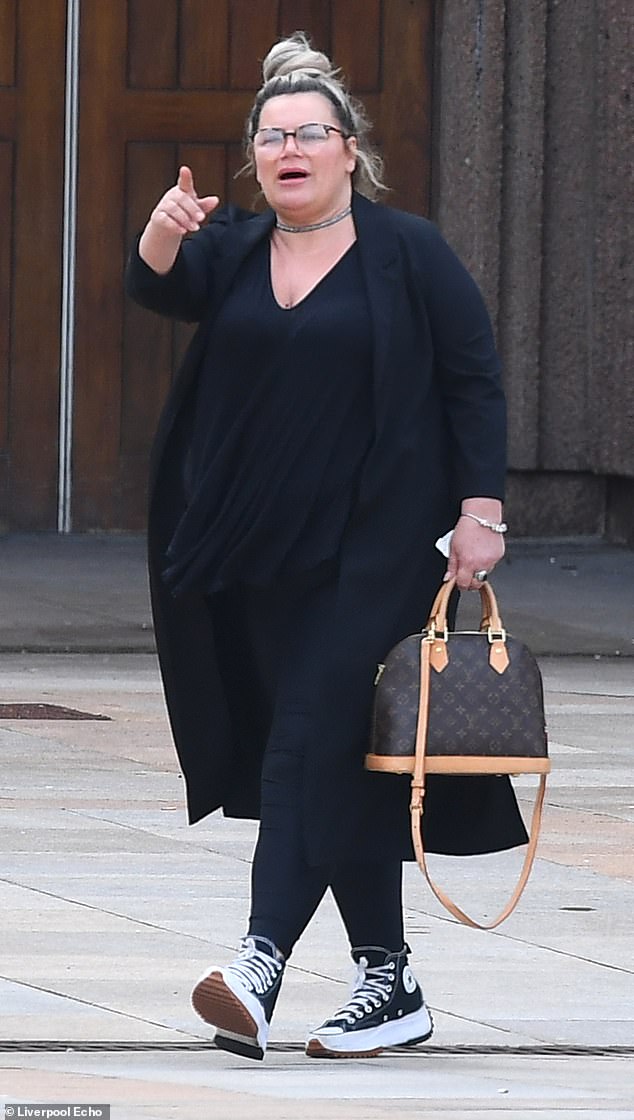 When interviewed, Fairfield said she didn’t remember what happened, but after being shown the CCTV was ‘very remorseful’. Pictured outside Liverpool Crown Court

Mr O’Donohoe said when interviewed, Fairfield said she didn’t remember what happened, but after being shown the CCTV was ‘very remorseful, she spoke of her poor health and she admitted throwing the items over the balcony’.

Fairfield, of Thornbank Terrace, Dundee, was charged with damaging property with intent to endanger life and attempting to cause grievous bodily harm to three members of staff.

However, prosecutors dropped these charges after they accepted guilty pleas to the lesser offences of criminal damage reckless as to whether property would be damaged and a charge of affray.

Nicola Daley, defending, said her ‘distressed and emotional’ client was ’embarrassed and horrified’.

She said: ‘She wishes to apologise not just to the court but to everybody working and who was in that hotel that night.’

Ms Daley added: ‘She is utterly devastated at the way she behaved that night. She cannot properly explain it.’

The court heard Fairfield had physical and mental health issues, suffered domestic violence at the hands of her parents and former partners, and was undergoing therapy.

Ms Daley said the usually polite woman, who had one previous conviction for drink driving, believed the combination of alcohol and medication made her act ‘out of character’.

Ms Daley said Fairfield had since asked her GP for counselling and abstained from drinking. 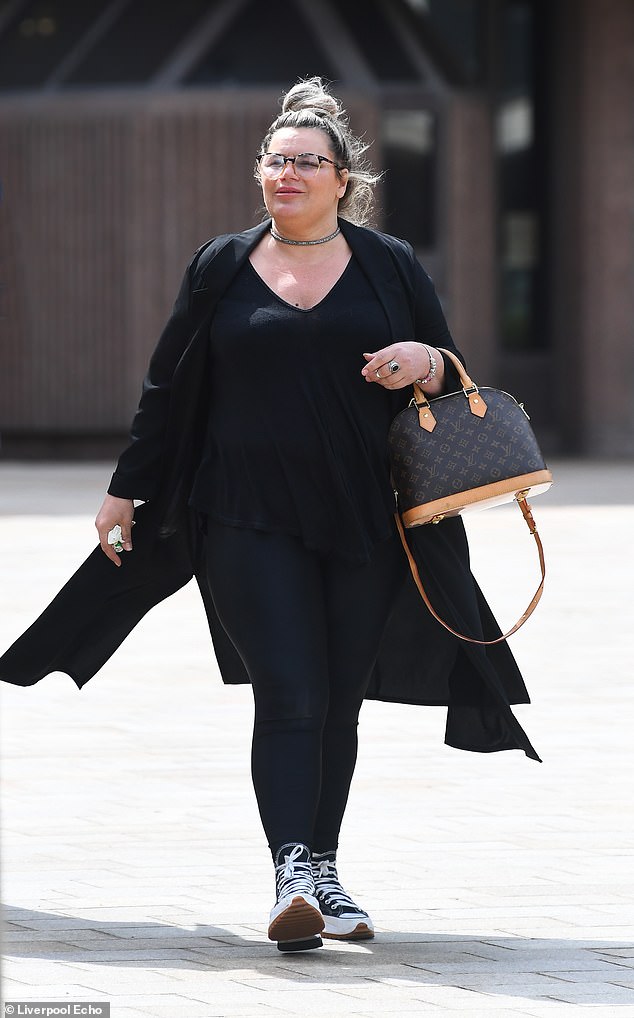 She said the mother, who had worked all her life and run her own businesses but did not have a lavish lifestyle, wasn’t in receipt of any maintenance payments from the father of their children, aged 12 and 13.

She asked the judge to follow the recommendation of a pre-sentence report and spare Fairfield prison, ‘given the time since the offence, what she has done and the impact it would have on her children’.

Judge Watson said Fairfield used the extinguisher as a weapon to ‘intimidate and frighten’.

He said: ‘It was part of your general hostility towards the staff, which had no basis in fact and of course caused serious fear and distress’.

He said she threw a highly dangerous missile into a busy public area, directed not at any specific individual, but at staff generally.

However, the judge noted her lack of relevant previous convictions, genuine remorse, ‘strong personal mitigation’ and that she was a primary carer for two children.

Judge Watson said there was a realistic prospect of rehabilitation and jailing her would have a harmful impact on her children ‘who are at a difficult stage of their young lives’.

He gave her 20 months in prison, suspended for two years, with a 30-day Rehabilitation Activity Requirement.

The judge said he didn’t make a compensation order because of her financial circumstances.