In a nutshell the brilliantly hilarious, pertinent, and wickedly smart new movie, You People is in some ways a new age Guess Who’s Coming To Dinner, that landmark 1967 Tracy-Hepburn-Poitier Oscar winning comedy about the effect an interracial relationship has on the parents of the young couple. Of course back then it was a major social issue and even had trouble booking some southern theatres. The idea was switched in a Bernie Mac/Ashton Kutcher 2005 remake that all those years later did not have the same impact. With anti-semitism and racism back on the rise in 2023 America however the concept of an interracial/interfaith marriage, Black and White, Jew and Muslim, could not be more timely or needed, and in co-star Jonah Hill’s and director Kenya Barris’ whipsmart screenplay is also a knock-you-out-of- your-seat laugh riot. Ironically I saw it this week at its World Premiere at the same Westwood Village theatre where I saw Guess Who’s Coming To Dinner all those years ago. With a packed house the laughter was so continuous and loud for You People it was hard to hear a lot of the lines. When was the last time that happened?

'Missing' Review: Followup To 2018's Sleeper Hit 'Searching' Is A Nail-Biting Thriller For The Internet Age

Keep in mind this is not a remake of that film, or a more recent take on parents at odds over their kids’ romantic choices, ie Meet The Parents, as this one marches to its own beat and has its feet firmly planted in the present – for better or worse. It also happens to be a glorious love letter to Los Angeles like no other movie in years.

Plotwise Hill, whose comic timing has never been used to better effect, plays Ezra, a tattooed, Blonde streaked-hair Jewish son from Brentwood who is working in a miserable job in finance, but has his heart in doing his “Mo And E-Z Show” podcast with a good Black friend (Sam Jay). In an amusing rideshare mixup he meets romcom cute with Amira Mohammed (a luminous Lauren London), sparks eventually fly after a lunch date, and they hook up, soon moving in together. Time to meet the parents. Uh oh. First it is Ezra’s family, Shelley Cohen (Julia Louis-Dreyfus), a westside L.A. Jewish mom who wants the best for her son and whose liberal attempts at relating to his new girlfriend are hilariously woke and awkward (“It will be wonderful to have Black grandkids”) . The father Arnold (David Duchovny) is a podiatrist with a talent for saying whatever comes to mind. Both are well intentioned but wholly embarrassing for Ezra, whose younger sister Liza (a pitch perfect Molly Gordon) is more drolly hip to the situation. On the other side Ezra fails to impress Amira’s dad, an architect named Akbar (Eddie Murphy) a Kufi-wearing Muslim married to Fatima ( wonderful Nia Long) , both disapproving of their daughter’s involvement with Ezra who tries hard to prove he understands the Black culture. Being clued into rapper Xzibit turns out to be comic fodder for just some of the jokes Barris and Hill provide in bulk in this culture clash. 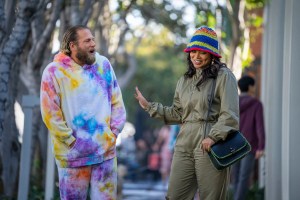 The centerpiece dinner bringing both sets of parents together with Ezra and Amira is one of the ages, particularly when the conversation turns to Akmar’s love for Louis Farrakhan (“He has a great vibe” Ezra pipes in at one cringe-worthy moment). It sets up a series of scenes as the young couple announce their marital plans and realize it isn’t easy merging families with cultural, religious, and racial differences in this day and age. At its heart though, You People makes a strong case for seeing each other first and foremost as human beings inhabiting the same planet together.

Barris (creator of black-ish, grown-ish) makes a dazzling feature directorial debut with a razor sharp script he and Hill wrote. There is no fat on this at all, virtually every line lands with precision, and the two hour-ish comedy flies by. L.A. is gorgeously shot (Mark Doering-Powell is the cinematographer) and Barris frequently provides interstitial scenes of L.A. landmarks to add flavor, from Roscoes to Randy’s to Capitol Records and much more. 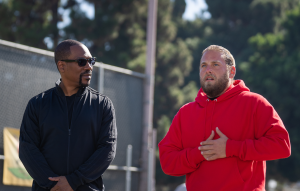 Hill’s return to full-throated comedy is a welcome one and he knocks it out of the park here, the Sidney Poitier as it were to Murphy’s Spencer Tracy. Murphy never seems to age and here has one of his best film outings in recent years, subtly playing a proud father who thinks he knows what is best for everyone – and that would not be Ezra. He continues to prove why he has been a star all these years. Louis-Dreyfus is a hoot throughout, a spirited liberal who really has no idea what she is saying. Duchovny suddenly going to the piano to sing a John Legend song for his Black guests is worth the price of admission. Among others in the cast Mike Epps proves to be a scene stealer as Uncle EJ, and popping in and out briefly are Elliot Gould, Rhea Perlman, Anthony Anderson, and Richard Benjamin among others, the latter in an amusing cameo as a Jewish doctor asking embarrasing questions to his patients after temple.

2023 may be young, but I can pretty much guarantee there won’t be a funnier, and in many ways, more important movie all year long. If there is then we are in for a great year in cinema. Producers are Barris, Hill, and Kevin Misher. Netflix opens it in select theatres today and begins streaming it on January 27.