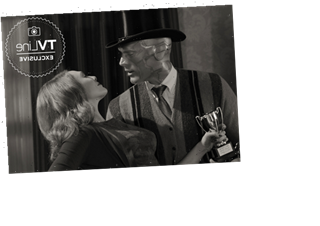 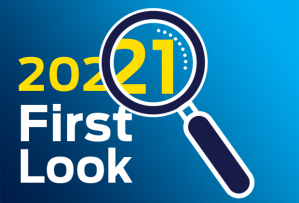 There is little to say about this exclusive photo from Disney+’s upcoming WandaVision series, other than: What in the (Marvel Cinematic) Universe is going on here?

Premiering Friday, Jan. 15, Disney+’s first live-action series from Marvel Studios is described as “a blend of classic television and the Marvel Cinematic Universe in which Wanda Maximoff (played by Elizabeth Olsen) and Vision (Paul Bettany) — two super-powered beings living idealized suburban lives — begin to suspect that everything is not as it seems.”

The couple’s “idealized suburban” life has been teased well in assorted trailers and promos, presented as a pastiche of classic TV tropes, from black-and-white sitcom to groovy ’70s comedy to something just a bit more contemporary.

Which leads us to the photo below, in which Vision appears to be greeting his better half whilst wearing a top hat and toting his missus’ LBD. Wanda in turn is clutching onto a… Westview Talent Show trophy?! What did they win, First Prize for saving the world multiple times as part of the Avengers? 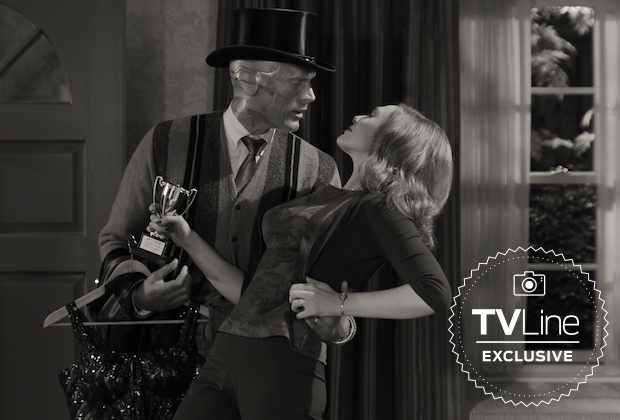 Something is definitely askew in whatever universe they are residing (entrapped?), as driven home by the trailer below and coupled with, of course, the fact that Vision tragically perished on the big screen.

Directed by Matt Shakman and with Jac Schaeffer serving as head writer, WandaVision will help set the stage for the MCU film Doctor Strange in the Multiverse of Madness (premiering March 2022), as will Spider-Man 3 (out Dec. 17), Marvel Studios chief Kevin Feige affirmed at this month’s Disney Investors Day.

WandaVision marks the first of many Marvel series to premiere on Disney+. The Falcon and Winter Soldier (starring MCU vets Anthony Mackie and Sebastian Stan) will follow on March 19, while Loki (starring Tom Hiddleston, Owen Wilson and Gugu Mbatha-Raw) is earmarked for a May release.

Additionally, Ms. Marvel (starring newcomer Iman Vellani as Kamala Khan), She-Hulk (led by Tatiana Maslany), Hawkeye (with Jeremy Renner and Hailee Steinfeld), Moon Knight (starring Oscar Isaac), Secret Invasion (with Samuel L. Jackson and Ben Mendelsohn reprising the MCU roles as Nick Fury and Talos) and a Guardians of the Galaxy holiday special are among the other live-action projects in the pipeline.