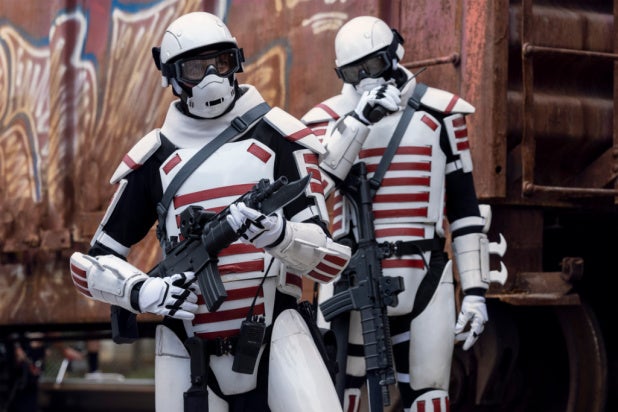 (This article contains spoilers for the episode of “The Walking Dead” that was released on March 18 on AMC+, and March 21 on cable)

The original season 10 finale of “The Walking Dead” introduced yet another new, potentially antagonistic new faction at the place where Eugene (Josh McDermitt) was supposed to meet the mysterious Stephanie. A group of white-armored troopers swarmed Eugene’s little crew as the the episode cut to black.

Since those those armor designs are ripped pretty much straight from the books, fans of the comics knew immediately that these guys are from a big city called the Commonwealth — or at least that’s what showrunner Angela Kang and co. want us to believe. With the way that “The Walking Dead” has played fast and loose with its adaptation of the story, however, I wouldn’t be so quick to make assumptions.

The big complicating factor is the Civic Republic, the villain faction from “The Walking Dead: World Beyond” which also made one brief appearance on “Fear the Walking Dead.” And they’re also the folks we think have Rick Grimes. The Civic Republic apparently has 200,000 people living in it, but we don’t know where it’s located.

In the comics, the only budding civilization like that was the Commonwealth, so for a while we kinda all assumed that the Civic Republic would serve the same function as the Commonwealth did in the comics. But the fact that these new guys are wearing white Commonwealth armor while the Civic Republic folks we’ve met thus far have sported black fatigues opens up the possibility that there really are two large civilizations in the “Walking Dead” TV universe.

In this week’s episode, “Splinter,” we learn a little bit more about these stormtrooper-looking guys as we finally see at least some of what happened after they captured our heroes. The episode focuses primarily on Princess (Paola Lazaro) as she struggles with her confinement. It makes sense — she finally got to be around people again after years of isolation, so she doesn’t handle being locked up in a dark train car all that well.

The way this episode plays out is not quite how it goes in the comics. Originally the group from Alexandria had only a brief standoff with the soldiers before everyone relaxed. It wasn’t a drawn-out situation like this with folks getting locked up and whatnot — this episode begins during the night and appears to wrap up at some point during the following day.

With regards to the greater plot of “The Walking Dead,” we get only the barest of details about what’s going on here. One of the soldiers brings Princess some food, and she gets the drop on him, takes his gun and, after a little bit of interrogating, beats him up.

This soldier says a couple vaguely illuminating things, including what sounds like some kind of motto: “For the benefit of all, and all who seek solace at our gates.” This is not a Commonwealth slogan from the comics, for the record.

“The place we live is a good place,” the solider says later. “It’s our job to keep the many, many good people who live there safe. We’re careful because we have a lot to lose.”

These are things we might expect people from both the Commonwealth and the Civic Republic to say, so I’m not sure how illuminating this whole discussion really was — though we learned plenty about what’s going on in Princess’s head, which is nice since she’s still so new.

Perhaps more illuminating is the implication that the entire interaction between Princess and this soldier was some sort of con job by the soldier. One big clue is his line about being so new his rifle isn’t even loaded — they could have kept it unloaded because they don’t want Princess to be able to use the thing. But the real tell is what happens at the very end.

The guy’s posture changes abruptly when Princess gives him his gun back. And when Princess asks when she can see her friends, he very knowingly said “right now” before opening the door and revealing said friends standing there, bags over their heads, with soldiers holding on to them.

All of that screams setup, though it probably wasn’t part of the plan for Princess to bloody him up. He was likely sent in there to pry details out of her in a less confrontational way, by just talking.

It’s possible that, as we first thought when we saw these guys last year, they’re really just Commonwealth. But it’s very interesting to me that even now “The Walking Dead” hasn’t identified them. Their name comes up pretty early on in this encounter in the comics, and given the presence of the Civic Republic in this universe it feels like there’s a reason they’re continuing to be cryptic.

There’s been speculation that maybe “The Walking Dead” will have a climax that involves the Civic Republic and the Commonwealth — and Virginia’s big group from “Fear the Walking Dead” even — having a war between each other with the Alexandria crew getting caught up in it.

But I still can’t help but wonder if there’s something else going on here. There are still so many puzzle pieces in play, and we just know too little. And with this new militaristic Reaper crew in play as well, I just don’t know what to think anymore.

There are still two more episodes in the extended season 10 of “The Walking Dead” — I bet we’ll learn more about all this very soon. Or at least I hope we do.