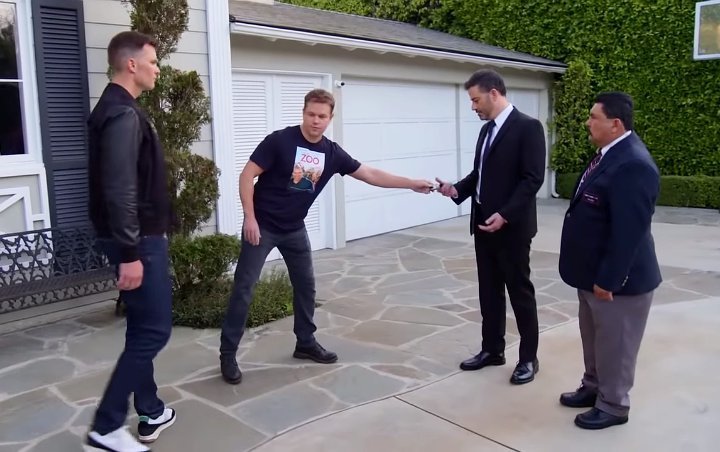 AceShowbiz –Jimmy Kimmel enlisted the help of Tom Brady to irk his longtime on-screen nemesis Matt Damon in a new sketch on “Jimmy Kimmel Live!“. Released in full on Thursday night, May 2, the video follows the NFL player as he appeared as a guest on the ABC late-night talk show.

When he claimed that his arm is as strong as it ever was, Jimmy challenged him to show it to the audience. Jimmy’s sidekick/security Guillermo Rodriguez warned him that it could be dangerous to throw the ball inside the studio, so Jimmy took Tom outside with Guillermo.

The three then took a cab to head to a place which Jimmy said would be perfect for a target practice. As they arrived in front of a house, the comedian asked Tom to throw his ball through a window on the second floor. The 41-year-old hit the target, breaking the window and the frame.

Unbeknown to him was that it’s Matt’s house. The actor rushed out of the house, yelling angrily, “Jimmy, did you do that? Did you throw that?” Claiming that he didn’t know it was Matt’s house, Jimmy blamed Tom as saying, “No, I didn’t. He did, he threw it,” pointing to the athlete.

But when Tom admitted that he’s the one who broke the window, Matt didn’t look upset at all. Introducing himself as the New England Patriots player’s “No. 1 fan,” he asked to take a picture with Tom before they left.

Matt handed his phone to Jimmy to take their picture, prompting the latter to mock the case featuring an image of a unicorn. “Is this your phone? Cute,” he said. “Yeah. I like animals, man,” Matt explained. But instead of taking their picture, Jimmy threw the phone through the window behind Matt and Tom.

“Son of a b***h,” an angry Matt exploded. “It slipped out of my hands,” Jimmy claimed, but “The Martian” star refused to believe. “What the f**k, Jimmy? It wasn’t an accident,” he lashed out at the comedian. “Are you never having an accident? You never did anything wrong?” the talk show host talked back.

As the argument got intense, Tom stood in silence and looked uncomfortable. Jimmy tried to end it by leaving the house with his two friends, but Matt insisted that they waited for a second as he went inside to take something.

Ignoring Matt’s request, the three left in the cab, shortly after Matt came out with a small and a big Tom Brady doll that he slept in between. The taxi moved backwards, seemingly returning to Matt’s house, only to knock down his mailbox.