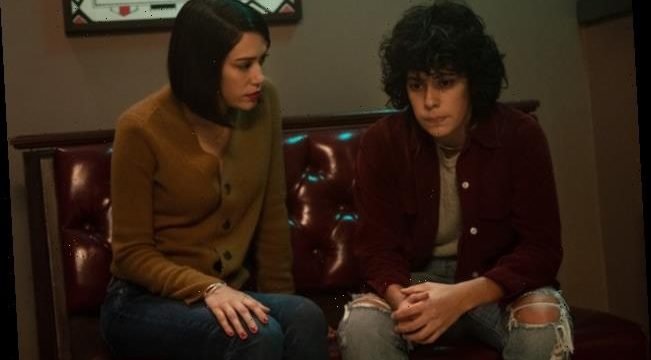 Sunday’s Vida ended with Emma feeling low, hunched over a toilet from the side effects of the abortion pill and reeling at the realization that her sister has re-established contact with the father they thought was dead.

Yeah, you’d probably seek comfort in the arms of your recent ex, too.

Emma and her former girlfriend, Nico — who comforts a sweaty, shaky Emma in the episode’s final moments — are “both really going through a lot,” series star Mishel Prada tells TVLine. “Nico’s past is catching up with them. She says it throughout the episode, and you realize she just gets caught up in helping other people and being a savior.” But Nico, played by Roberta Colindrez, has decided she’s had enough: As viewers will recall, she gave Emma (who also happens to be her employer) her two weeks’ notice earlier in the ep.

Aborting her baby with Baco, losing the woman she loves, feeling betrayed by her sister — all are huge emotional blows, but Prada says Emma will be damned before she shows that any of it is getting to her.

“When I was going through that episode, I was thinking, ‘Oh, wow. This is an opportunity to show somebody who thinks they’re immune from this,’” she says. “Like, ‘I’m strong,’ and it’s just like, no. This is something you’re going to have to deal with, and you can’t just brush over it.”

And yes, Emma’s repeated rush for the nearest bathroom wasn’t the most pleasant thing to watch, but Prada has a deeper take on it. “If you really want to get philosophical with it, we’re talking about that generational trauma and purging this past that she’s had, which is the way that she was treating Baco and the way that she would treat other people.” Getting all of that out of her system, so to speak, allows Emma “to be able to then go on and not be that way anymore.” Prada chuckles. “At least, try not to be that way anymore.”

Will this softer Emma stick around? We’ll see how it pans out: The series finale airs Sunday on Starz (9/8c).

With the weight of their mother’s legacy on their shoulders, the sisters are forced to decide whether they will ultimately stay together or go their separate ways.