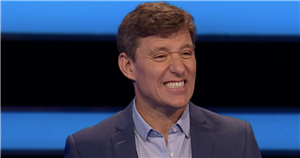 Ben Shephard set social media alight during Tipping Point on Monday afternoon as he grilled contestants Ellie and Mike over the knowledge of sweet treats.

The ITV regular, 46, left viewers in stitches following one question relating to one of the nations favourite confectionary snacks, Malteasers.

Ben is no stranger to gaining a large reaction on social media, often finding himself leaving fans feeling hot under the collar following his appearance on the early-evening programme.

However, it was his energy during today's instalment that had fans in stitches as he probed the pair on the history of one of Mars' most popular chocolate items.

"When they were first sold in 1937, which brand of chocolate confectionery were originally described as 'energy balls'?" asked Ben.

While Ellie was left confused after hearing the question, her competitor Mike was given the opportunity to answer after she had passed the question to him.

After correctly answering the question, Mike was instantly rewarded with a financial gain but it was Ben's energy that viewers talking.

Taking to Twitter, one viewer penned: "Hmmm… I can think of one person who has 'energy balls'… #TippingPoint" alongside a winky-eye emoji.

A second went on to add: "Ben has energy balls #TippingPoint."

"This isn't looking good for Ben and his energy balls #tippingpoint," commented a fourth.

Malteasers, owned by Mars, Incorporated were introduced to shelves in 1937 after being created by American businessman, Forrest Mars Sr just one year before.

Originally, they had been described as "energy balls" and had been intended to slim women.

Last year, a YouGov poll saw Malteasers ranked as the most popular confectionery in the United Kingdom.

Following Mike's victory steal from Ellie, he went on to walk away from the programme with £3,900 – admitting his wife would not have been impressed had he swapped his total for the option to attempt to win £10,000.

His decision certainly paid off as all three of Ben's final drops saw him bag just an extra £50, leaving the jackpot token firmly on the bottom shelf.