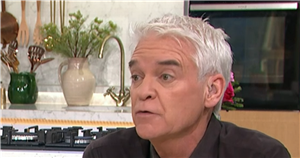 Phillip Schofield has revealed he was "scarred for life" by an electric blanket.

The This Morning star, 60, appeared on Monday's episode (November 21) of the ITV programme where he discussed the "painful" ordeal with his co-host Holly Willoughby and presenter Alice Beer.

Recalling the scary incident, Phil said he was staying in New Zealand when he fell asleep with the heating device plugged in.

He later woke up to the panful sensation of his skin scolding, as he warned fans to stay vigilant when using similar devices to warm their own beds.

Confirming the incident had happened a number of years ago, Phil said: "I have a scar on the top of my right leg from New Zealand when I was 21/22.

"It was a loop on the electric blanket which I left on overnight whilst I was in there.

"Luckily, no electric shock but it scarred me for life on my leg."

Phil recalled the incident after defending comedian Joe Lycett over his cash-burning World Cup stunt earlier in the show.

Having since confirmed he didn't in fact shred £10k in the incident but instead, David Beckham's Attitude Magazine cover – Joe was defended by the presenter as This Morning contributor deemed his actions "wasteful".

Phil said: "Would he have got the same amount of publicity [by giving the money to a charity]?

"Are we making Joe a villain here for taking a stand against Qatar's regime?"

Phil left This Morning viewers gobsmacked by displaying his old landline number on the show.

This Morning airs from 10am on weekdays on ITV.