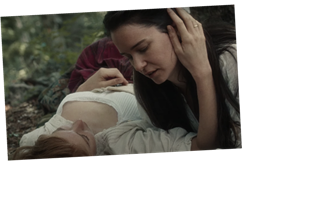 Vanessa Kirby and Katherine Waterston are lovers on the American frontier in Mona Fastvold’s ravishing period romance “The World to Come,” which finally comes to U.S. audiences after an acclaimed bow at last year’s Venice Film Festival. The lesbian love story, co-starring Casey Affleck and Christopher Abbott, makes its stateside premiere virtually at the Sundance Film Festival before opening from Bleecker Street Films in available theaters on February 12 and on digital March 2. Watch the trailer below.

Set during the 19th-century somewhere along the east coast of the United States, “The World to Come” follows the acting foursome as they battle the elements and isolation. Waterston, who also provides a literary voiceover in the form of epistolary diary entries, plays Abigail, grieving from a recent loss while eking out a pastoral life with her husband, Dyer (Affleck). She’s thrown for an emotional tailspin when she meets Tallie (Kirby), with whom she sparks an instant attraction, leading to a stolen romance that’s complicated by Tallie’s possessive husband, Finney (Abbott).

Fastvold’s film, which won the Queer Palm in Venice, is adapted from a story by Jim Shepard, with Shepard sharing screenwriting credits with Ron Hansen. The level of craft in the film is stunning, with painterly celluloid cinematography from André Chemetoff, and a bracing jazz score from Daniel Blumberg.

IndieWire’s David Ehrlich went over the moon for the film out of Venice, writing: “As coldly drawn as an atlas yet no less capable of enflaming the imagination, Mona Fastvold’s ‘The World to Come’ is a hard and brittle period love story that thaws into something much warmer — what its hyper-literate heroine would call ‘astonishment and joy’ — as a merciless 19th-century winter blushes into a most unexpected spring.”

IndieWire’s Anne Thompson also spoke to director Fastvold about the film out of the Italian festival. “These two women are normal women,” she said. “There’s nothing special to look at in their story: they meet, have a connection, fall in love.” But she saw an opening. “Something about the sheer beauty in their interaction and how they communicate to one another: ‘I haven’t really seen this before; I can take this classic love story, I can break open part of it, and do something with it.’”