Disney+ headliner original series The Mandalorian has been kept so secretive that if you’re watching it and have absolutely no idea what’s going on, don’t sweat it. Literally none of us do. Aside from a few Easter Eggs and familiar vocabulary words, even Star Wars fans are going into this thing blind. You don’t need to know Jabba from jawas to get drawn into the world of The Mandalorian.

Every sweeping landscape is gorgeous to look at, and Ludwig Göransson’s score is absolutely getting added to my work playlist this winter. There are some real instrumental bangers right off the bat. We also have to talk about Pedro Pascal’s performance as the titular Mandalorian. You wouldn’t necessarily know it from looking at him, but that’s the guy who got his eyes smooshed on Game of Thrones. (Your dad probably knows him from Narcos.) How he manages to be so compelling, dryly comic, and ridiculously attractive with a fully masked face is maybe the biggest mystery of all. Seriously, it makes no sense that he’s this hot in this role. 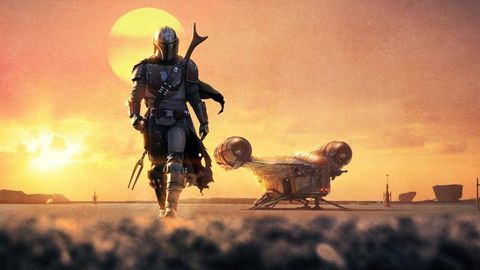 As a character, the Mandalorian is the Star Wars equivalent of “not here to make friends.” He works alone and he wants you to know it. He rolls up into dive bars, blasters blazing, and he doesn’t care who he has to cut in half in order to complete his assignment and get paid. He also hates droids (robots) for some unexplained reason. He’s like your one friend who deleted Facebook before it was cool and begrudgingly carries a flip phone. Maybe he listens to vinyl, I don’t know his life.

In Episode 1 we’re basically just following the Mandalorian as he goes about his job and errands for the day. He captures one criminal with ease, showing us that he’s good at what he does. He collects payment from one guy, gets information about his next assignment from another guy, and gets a new shoulder pad for his armor made by a cool blacksmith lady. The flashiest of flashbacks reveal that his parents were killed. Of course! Did you not expect a tragic backstory coming?