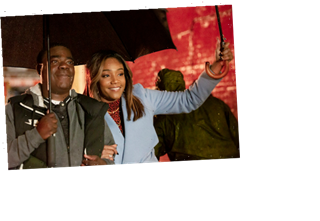 TBS is bringing The Last O.G. back for a fourth season, but leading man Tracy Morgan may be going it alone.

The cabler announced Thursday that it has renewed the Jordan Peele-EP’d comedy series for Season 4, but co-lead Tiffany Haddish‘s name is conspicuously missing from the accompanying press release. When asked about the actress being MIA in the announcement, a source close to the show would only say, “Season 4 is still in development.” A TBS rep declined comment.

Black-ish scribe Owen Smith, meanwhile, will be taking over as showrunner on the series. He replaces Season 3 showrunner Keenen Ivory Wayans.

“I was already a big fan of the show so getting the opportunity to helm this production and work with this amazing cast and crew is a huge honor,” Smith said in a statement. “I’m looking forward to telling stories that humanize Black men in ways that are not just comedic but relevant and real.”

The Last O.G. follows Tray (Morgan), an ex-con who is stunned to discover how much the world has changed during his 15-year prison stint. After finding a place to live and new forms of income, Tray continues to “meet challenges as he re-paves his way in his newly affluent Brooklyn neighborhood.”

“I am so excited that we get to make another season of ‘The Last O.G.,’” Morgan said in his own statement. “All I ever want to do is try and bring joy to people which is hard right now but I appreciate that we will have the chance to go back to work and do what we can to make the world a little brighter.”