When early test audiences checked out Sony’s latest horror offering, the men had a complaint: They didn’t like the title. Originally known as “The Bride,” director Jessica M. Thompson’s sophomore feature soon became “The Invitation.” The twist: No matter the name, it’s still a feminist vampire film.

“I loved ‘The Bride,’ I thought it was a great title, but it really wasn’t tracking well with male audiences, which is disappointing,” Thompson told IndieWire during a recent interview. “Obviously, ‘The Invitation’ is a play on vampires having to be invited into the house, things like that. There were a couple of others that I also thought were good contenders, but the audience overwhelmingly said that they loved this one. … The thing is, I was an independent filmmaker before, this is my first studio film, and Sony is an incredible partner. Anything I asked for, I got. Not everyone can say that. They’re a massive corporation, and they know how to do this marketing stuff.”

That includes the film’s trailers, which some viewers worried gave away the film’s entire plot. Thompson doesn’t love spoilers, but realizes that the younger audiences are eager to get a bigger taste before they buy a ticket.

“This is what they assured me was the right approach,” she said. “Gen-Zs and stuff, supposedly they really do want to kind of know a little bit of everything before they get into the film. I’m open to it. I trust that, even though I know [the trailer] gives away a lot of the twist, which I think I would rather not know going in, to have that shock factor. But there’s still a lot to the film that isn’t revealed.” 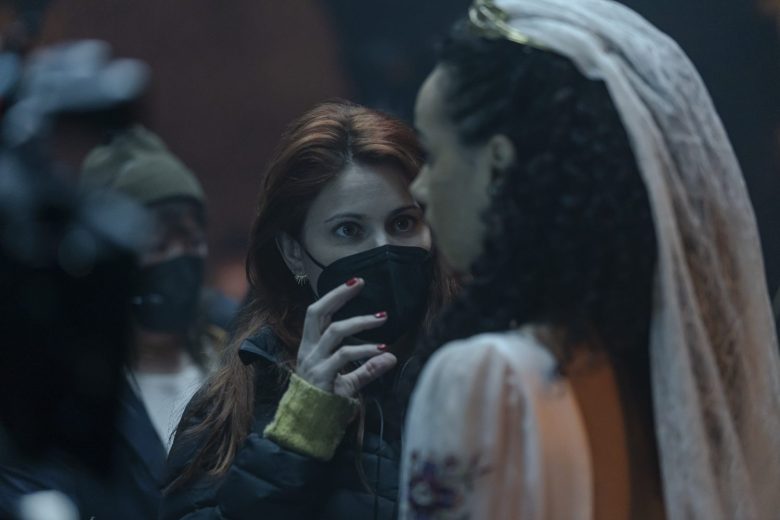 Jessica M. Thompson and Nathalie Emmanuel on the set of “The Invitation”

The film follows Evie (“Game of Thrones” breakout Nathalie Emmanuel), an adult orphan muddling her way through city life and feeling quite alone. After she takes a DNA test, she’s delighted to discover an entire unknown side of the family — and they’re not just eager to meet her, they’re also rich as hell, the kind of people who own manors in the English countryside.

When Evie alights for a family wedding to meet the rest of her clan, she’s struck by an alluring friend of the family, Walter (Thomas Doherty), who makes eyes at her. But what exactly does Walter want from Evie? One thing Thompson is not at all shy about revealing is the film isn’t just a vampire story; it’s a direct homage to the most famous vampire of all.

“There are over a hundred Easter eggs from Bram Stoker’s ‘Dracula’ in the film,” she said of the seminal Gothic horror novel. “I see it as a feminist reimagining of the ‘Brides of Dracula,’ like an origin story, but I don’t think we want to be limited to just that. I was like, ‘I’ve not seen that before. And this is a really empowering story, and I want to tell it.’ It’s great to have these source materials that have lasted the test of time and to give you inspiration, but I think the movie is contemporary and has moved away from the source.”

That goes down to casting, which adds a new dimension to the decades-old story. When Thompson first read Blair Butler’s original script, Evie was not a woman of color. As they started rewrites, Thompson wanted to change Evie’s race.

“I really wanted her to be a woman of color [because] this is a story about smashing the patriarchy and I feel that women of color have been largely the most disenfranchised group,” Thompson said. “It adds those little layers, it adds those little elements. Nathalie Emmanuel is always someone that I am a big fan of. I loved her as Missandei [in ‘Game of Thrones’] and I thought she would be incredible for this role.” 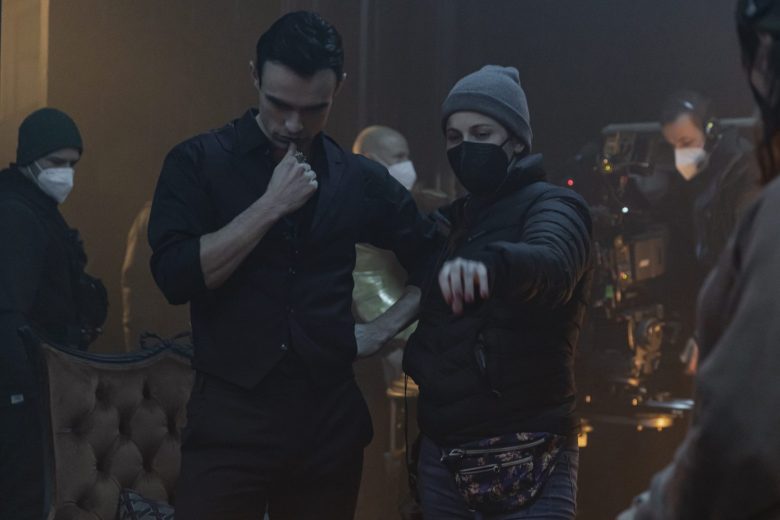 Jessica M. Thompson and Thomas Doherty on the set of “The Invitation”

Mostly, Thompson said, she wanted make a movie about complicated, compelling women. Thompson won the 2017 SXSW Film Festival audience award for her deep-feeling portrait of life after sexual assault, “The Light of the Moon,” and while the Aussie editor-turned-director knew she wanted to keep telling stories centered on women, she wasn’t eager to duplicate the making of that film.

“This might really shock you, but I got offered a lot of rape films [after ‘The Light of the Moon’],” she said. “‘The Light of the Moon,’ it really took it out of me. I did every single [non-acting] role: write, direct, edit, produce.” The film cost about $100,000. Thompson also designed the poster and led its its social media campaign. It was a true labor of love, but she was eager to see its themes translate elsewhere. Enter: feminist vampire film.

“I just love complicated women, and I love women rising, rising from the ashes, rising through trauma, rising through difficult times,” she said. “I like a flawed model, and I don’t think there’s enough of them on screen. It’s so crazy to me that, in 2022, there’s still so many tropes for women roles. … I’m drawn to these kind of empowering womens’ stories, but not because they’re perfect or better than anybody else, but just because they are who they are. We don’t just want power suits and to dress like men. We want to be who we are.”

Or, as it happens, to twist an old favorite, no matter its name.

A Sony release, “The Invitation” will hit theaters on Friday, August 26.