Entering adolescence around the time of 9/11 was interesting, especially as I look back on it as an adult. It’s as if I can pinpoint the moment I knew what “anxiety” was. So when anthrax started getting mailed to random people — or at least that’s what I remember being told — that anxiety went up 1,000-fold. If you asked me today if they ever identified a culprit, I’d assume they never did, and also that they never had a suspect and that the person, like the Zodiac, just vanished into the ether.

National Geographic’s second season of “The Hot Zone” attempts to answer that question, or at least recreate what happened in those few weeks, months, and years after 9/11, when anthrax started working its way through the U.S. postal service. Starting three weeks after 9/11, the look and structure of the season feel akin to “Zero Dark Thirty,” with much of the series leaping between locations and times with little differentiating things other than onscreen text.

It’s weird watching this after “The Hot Zone: Ebola.” Maybe because that first season was based on Richard Preston’s riveting book of the same name. Or maybe it’s because Ebola is such a terrifying virus in itself? (Preston’s description of what happens to Ebola sufferers is haunting.) But the entirety of “The Hot Zone: Anthrax” is about the fear of the infection at all. In fact, the disease itself feels cast to the side.

Sure, we see a man fall ill with it — manifested onscreen as a lack of consciousness and sweating — and other victims are stricken with large lesions, but the sense of terror just isn’t present. What is present is a lot of government types telling people how scared they should be, especially considering the events happening so close to 9/11, and that’s where the more complicated elements of telling this story pop up, or are discarded entirely.

Two men are at the center of things: FBI agent Matthew Ryker (Daniel Dae Kim) and USAMRIID scientist Bruce Ivins (Tony Goldwyn). Other characters pop in and out of these men’s lives, but they’re really 95% of the focus, and considering the trajectory of the story, only one is compelling enough to sustain every episode’s running time. Kim can be a charismatic figure, but Ryker is all seriousness, with a perpetual scowl on his face. 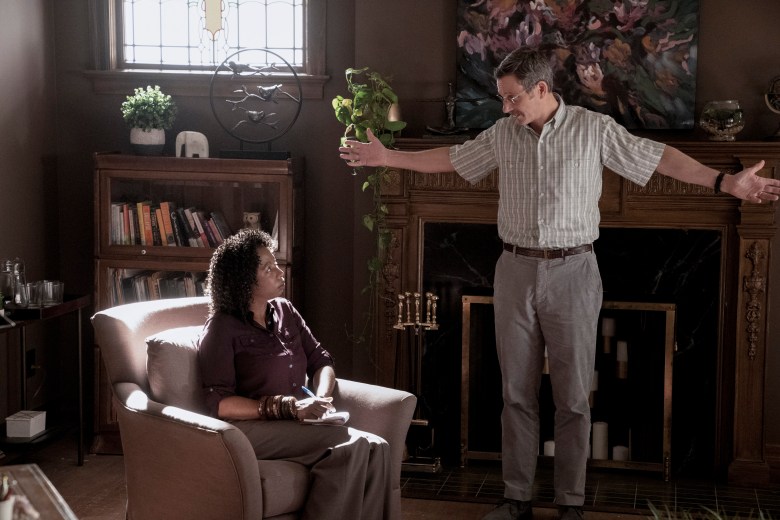 Ryker is one of many people struggling after 9/11, having witnessed the plane that flew into the Pentagon firsthand. But much of that anxiety is manifested in Kim holding his head as flashbacks of rumbling change unspool. Really, he’s law and order, the one there to tell government heads they’re wrong and that the worst is yet to come.

Ryker represents the government side and that leads to many repetitious scenes of characters sitting and talking about how bad things are but, because we aren’t seeing the victims themselves or learning about them as people, it feels rather mute, slow, and dour. This isn’t an action-packed spectacle like “Outbreak.”

Ryker knows he’s on the right track, but the show leans heavily on making the case that a rogue connection to the anthrax strain maybe fostered the Iraq War without outright saying that. Like other shows that have attempted to look back at past events with today’s knowledge, “The Hot Zone: Anthrax” doesn’t really have much to say about how this scare impacted our response to people of color, the war, or our current pandemic.

Tony Goldwyn’s Bruce provides whatever’s passing for excitement, and that’s mainly because the character is the stereotypical Lone Weirdo. His Bruce Ivins is described as both a brilliant genius and an “odd duck.” One who has a nice family, but also makes numerous women uncomfortable even before anthrax starts hitting the post office. It’s interesting how over halfway through the series one of the female detectives says how men love Bruce, but women are skeeved out, only to have one of the male detectives say that’s not weird. That is where “The Hot Zone: Anthrax” has something to say, and it’s a shame it takes over half the series to do so.

At every turn Goldwyn’s character is nice but offbeat as he tries to be funny, until he isn’t. Goldwyn also captures the character’s issues with women, issues the scripts don’t quite know what to do with. It’s a big, showy performance but one that draws way too much upon a Norman Bates caricature, right down to an episode set in the 1950s with a teenage Bruce dealing with an emasculating mother who killed his father.

“The Hot Zone: Anthrax” is a formulaic look back at the anthrax scare with little profound or specific to say. Tony Goldwyn gives a flamboyant lesson in fear, but everything else is too much of a slog to get into.

“The Hot Zone: Anthrax” premieres Sunday, November 28 on National Geographic. All episodes will air as a three-night event and be available to stream the next day on Hulu.