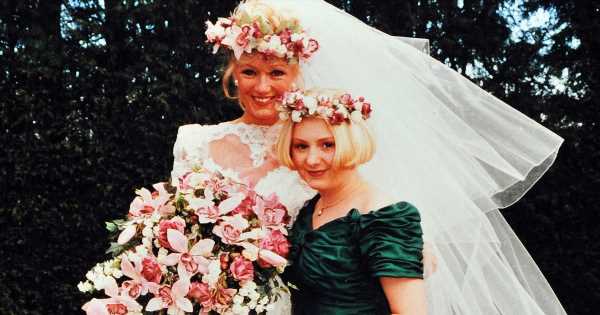 Gripping murder drama A Confession tells the real-life tragic stories of Sian O’Callaghan and Becky Godden-Edwards, both killed by evil Christopher Halliwell, and the detective who battled to bring him to justice.

The ITV series, starring Martin Freeman as Det Supt Steve Fulcher and Imelda Staunton as Becky’s mum Karen, has captivated viewers, pulling in an audience of five million for its opening episode.

Here, in an exclusive extract from her new book A Killer's Confession: And a Mother’s Fight for the Truth, Karen Edwards, shares her heartbreaking story…

Mum, I think you need to come here.”

My son, Steven, had answered the knock on the front door.

Now he was calling me from the kitchen. I knew then, even before I looked down the hallway. Maybe I caught the tone of Steven’s voice, a nuance that would have been lost on anyone else. A mother’s instinct, perhaps.

As soon as I saw the police officer I knew why he was standing there. Becky, on what would have been her 29th birthday.

I recognised the officer straight away because I’d seen him on the television. Everyone knew his name.

For the last two weeks a police investigation had played out as police looked into the disappearance and murder of Sian O’Callaghan, a pretty local girl who had gone missing on her way home from a nightclub in Swindon, in the early hours of Saturday, March 19, 2011.

The officer in charge of the case, Detective Superintendent Stephen Fulcher, had delivered all the news updates on the enquiry. He was now on my doorstep.

The investigation into Sian’s disappearance was all anyone could talk about, me and Charlie included, as Sian had gone missing on our wedding anniversary.

I had felt an enormous sympathy for Sian’s parents, as I imagined what they must be going through. I had seen them and Sian’s boyfriend, Kevin Reape, on the news, saw the pain and worry etched on their faces.

The man now at my door had been sitting next to them.

He had hero status in Swindon. Not only had he captured Sian’s abductor and murderer, but he had discovered Sian’s body so she could be returned to her family. But there had also been an extraordinary twist.

When Det Supt Fulcher had first ordered the arrest of a local taxi driver, Christopher Halliwell, for Sian’s abduction, no one could have predicted what would happen next. Halliwell repeatedly replied “no comment” to other officers when they asked him where Sian was. They hoped she might still be alive somewhere so they had to find her fast.

He refused to co-operate, so before he was taken to the police station, Det Supt Fulcher himself asked to speak to Halliwell. He wanted to look the man he had spent days hunting in the eye to persuade him to reveal where he had taken Sian. It worked.

Halliwell told Det Supt Fulcher he would lead him to Sian. He then took officers on a long car journey into the Oxfordshire countryside.

Halliwell indicated he had killed Sian and had left her body somewhere down a steep verge along a stretch of road. He hadn’t been able to locate the spot exactly, because he’d left her there in the black of the night. In the daylight, he was not so sure where she was, but knew the road he had driven along.

While a helicopter was searching the area for Sian’s body, and before he was taken into custody, Halliwell requested to talk further to Det Supt Fulcher.

He had Halliwell driven to a quiet spot and asked him what he had to say.

“Do you want another one?” Halliwell asked. He had murdered a woman some years earlier, in either 2003, 2004 or 2005; he couldn’t be more precise than that. But he could take him to the spot – the exact spot – where he’d buried her. He directed officers down winding, single-track lanes until they reached a remote field in Eastleach, Gloucestershire. Halliwell got out of the police car and climbed over a dry-stone wall. Once in the field he paced steps to a spot and indicated that was where he had buried the woman.

A day later, the skeletal remains of a body were discovered a little way from where Halliwell indicated in the field. But he had given no name for his victim, so who was she?

When I heard on the news about another body being found in a field, something inside me told me it was Becky.

She had been a vulnerable, troubled teenager, disappearing for weeks and months at a time. But she always came back eventually. However, I hadn’t actually seen her for many years by now.

The last time I’d seen her, she’d promised me that she would come home when she was ready. So I’d waited. Although I was hurt that she wasn’t ready to return home to me yet, I convinced myself that I had to be patient. I remembered her promise and waited. It would be like she’d never been away.

But as I watched the news unfold, and through the week that followed I drove myself mad with fear and worry the body in the field was Becky. It had been eight years now since I had seen or heard from her myself. All the years I hadn’t seen her, I thought she was avoiding me, that we were estranged because she had chosen a life I didn’t agree with.

When I knew I was alone in the house, I sat in my bedroom, pen in hand at my dressing table. I picked up the phone and dialled the police. Dread was burning inside me. I was so frightened. But I had to do it.

“Hello, Wiltshire Police, how can I help you?” the call operator sounded quick and efficient.

“My name is Karen Edwards. My daughter, Becky, has been missing for a while and I’m concerned it could be my daughter found in the field at Eastleach.”

I was choking back the tears, trying to stay calm. As the operator spoke, she tried to reassure me by saying that 464 other people had also rung in to report their loved one missing since the body had been found.

I seized on what she said, writing the figure 464 on my note pad. But as much as I tried to stop myself thinking it, I just knew it was Becky.

Now, here was Stephen Fulcher at the front door. My heart was racing. I knew why Det Supt Fulcher was there and yet I so wanted it not to be true.

As I walked down the hallway towards him, my stomach churned. My palms were sweating. I knew. I just knew. I seemed to float towards him in slow motion. There was no more delaying. This was it. We stood facing each other.

“Mrs Edwards?” His voice was low and steady.

There was the merest hesitation before he answered. His eyes stayed fixed on mine.

Stood beside him was another policeman, with two women officers behind them.

“Please, no, no, not my Becky!” I cried. The tears were instant, as was a huge wave of fear, sadness and utter hopelessness.

I’d known for days in my heart, in my gut, but here was the awful confirmation. Nothing can ever prepare you for the shock. That Monday will be for ever etched in my memory. Now the police officers were closing the door behind them. My worst fears had been confirmed.

The body was Becky’s. My lovely baby was dead. My world shattered. To hear this today of all days was devastating. On the day she’d been born, I was told she was dead. I clung to Steven and just broke down.

I wasn’t in control any more. I felt an actual physical change, as if something died inside me. I couldn’t function, I couldn’t hear or speak.

The only thing I could do was cry hysterically.