The Chase was back on ITV this evening, and Bradley Walsh was back presenting the game show.

Anne Hegerty was the chaser today, and she was on fine form. However, it looked like she might have met her match with one contestant, Julie.

But the pair were both left stumped by one weather question with even host Bradley questioning if it could even be answered.

The question was: “Approximately how many tones of rainfall on Earth every minute of the day?”

The possible answers were 9 million, 90 million or 900 million.

After reading the question out aloud, an astonished Bradley asked: “What sort of a question’s that?”

It was revealed that Julie had gone for 900 million tonness and Bradley couldn’t believe she’d chosen the answer.

It turned out that Julie had in fact gone for the correct answer with Anne also choosing correctly.

“How did you get that!” Bradley exclaimed, clearly still baffled by the question. 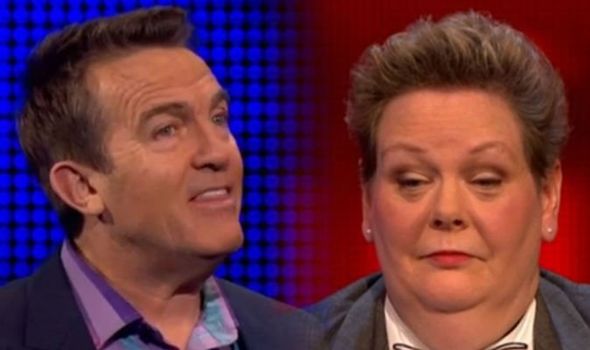 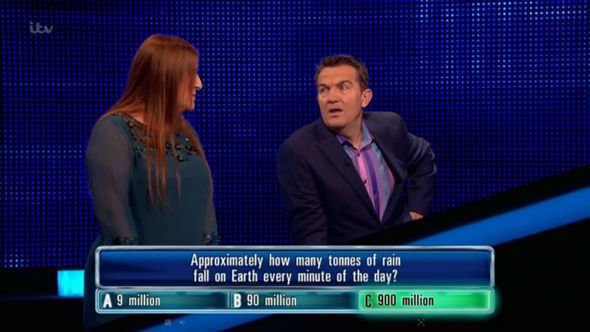 “Yeah, but 900 million every minute!” Bradley repeated in a state of shock at the unbelievable answer.

Meanwhile, Monday’s episode of The Chase saw contestant Carl take on the chaser Mark Labbett, who used information about his job against him.

Carl revealed he worked with fishermen to assess the quality of their fish.

Teasing the hopeful, Mark said: “Carl, just like your fish you’re about to get battered.” 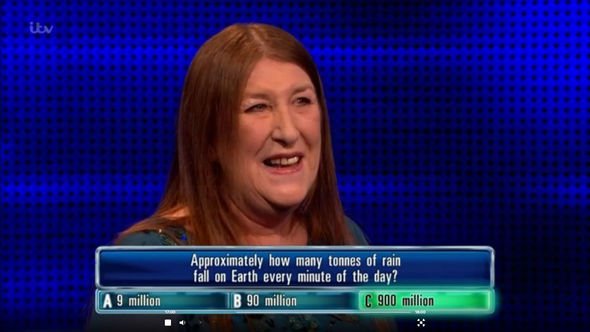 Usually, most contestants take the banter from the intimidating Chasers without a word, yet Carl wasn’t going to let Mark’s comments lie.

He quickly hit back by shaking his head and saying: “Poor. Poor joke, poor joke.”

But it didn’t seem like Carl was feeling too competitive as he went on to reject Mark’s higher offer.

Instead, he told Bradley he wanted to “school” the chaser, teasing him over his quizzing abilities.