Having already explored the vast photoreal toolsets of ILM for “Cloverfield” and Weta Digital for “Planet of the Apes,” director Matt Reeves eagerly implemented their latest advancements for his vision of “The Batman” as a grungy, neo-noir detective thriller. He principally utilized ILM’s fledgling StageCraft LED-wall volume system developed for “The Mandalorian” to add unfinished skylines and Weta’s own virtual production prowess to complete the rainy Batmobile freeway chase with Penguin (Colin Farrell).

“Matt wanted the Gotham cityscapes to be unique and special but still feel real,” said production VFX supervisor Dan Lemon (“Planet of the Apes”), who works at Weta. “He wanted the forms, architecture, and the fabric of the city to look like it was really in decay.”

Reeves was immediately enticed by the possibilities of StageCraft, which “Dune” Oscar nominee Fraser co-developed with ILM, even though it was still in its infancy in 2019 and was untested for detailed cityscapes requiring greater CPU power.

“Greig was a big advocate of that toolset — in particular, the realism that it brought to the lighting of the sets and the characters, where we had a substantial amount of the background that was created digitally [derived from art department concepts and plates shot in London, New York, and Chicago],” continued Lemon. 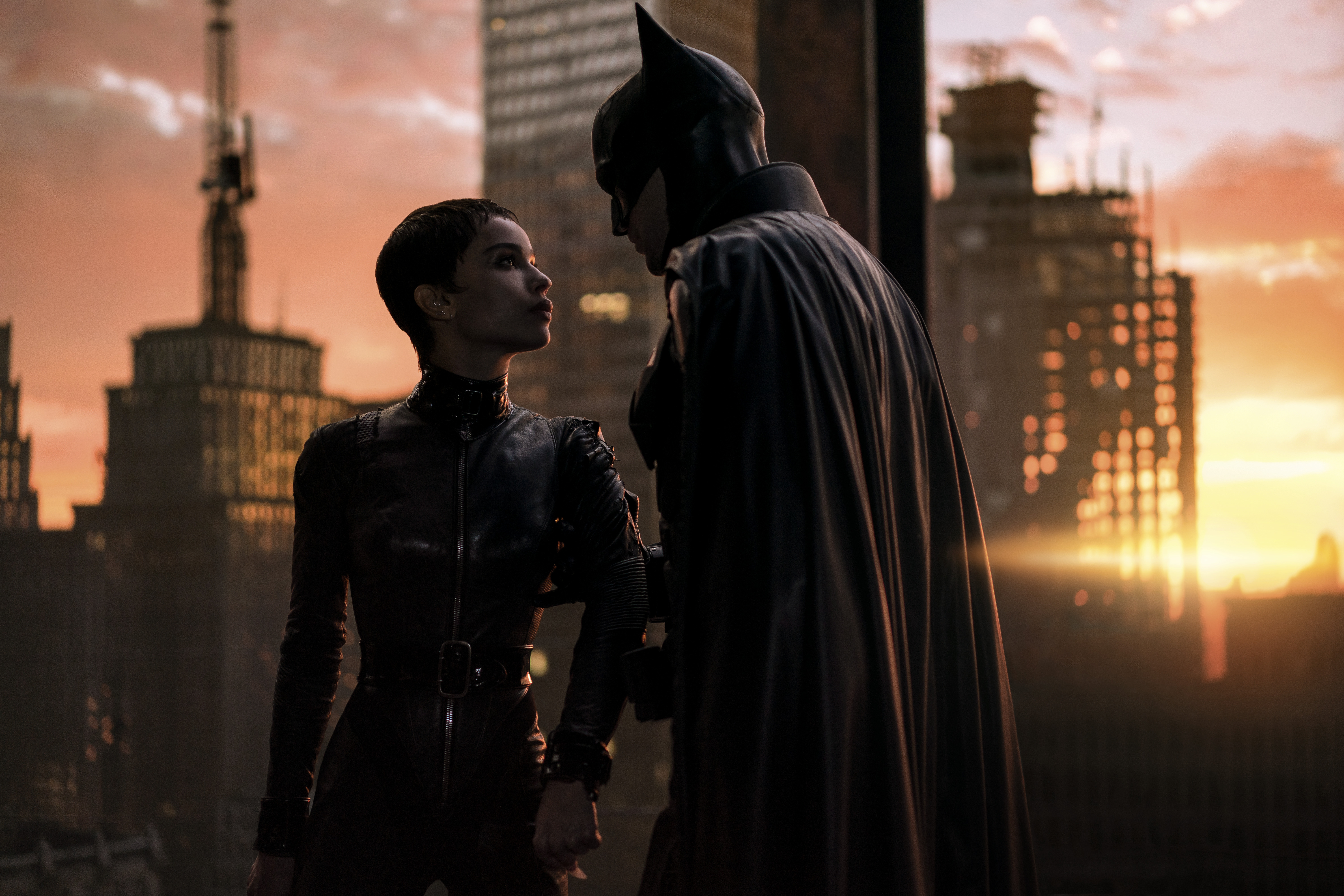 “For us, in visual effects, to be able to shoot and have all the natural qualities of the lens for in-camera finals, including out-of-focus and fall-off, had a lot of appeal. But not having to struggle with blue-screen and green-screen lighting deficiencies that appear flat and unnatural, to be able to have a sunset or a dark city already there and bouncing off the skin of the characters, was a big advantage.”

Yet ILM had to move quickly in setting up a customized pop-up StageCraft volume set in London. They only had a couple of weeks to shoot the skyline scenes of the skyscraper with Robert Pattinson (The Batman), Jeffrey Wright (Detective Gordon), and Zoë Kravitz (Catwoman). That meant the CG content had to be ready to go, powered in real-time by Epic’s Unreal engine and projected on the LED wall screens behind the actors.

“As it evolved, more of the buildings became full CG builds, and the majority of the photography was gone because they had to replace the facades and many of the looks of the buildings, and had to add levels of complexity, particularly the rain,” said ILM VFX supervisor Russell Earl. “We went through different times of day: night, dawn, dusk, daylight. We also had different sun positions to put up for Fraser to preselect what the sun positions would be on each shooting day.”

However, Stagecraft was especially great for soft, Magic Hour light, with the lens flare of the sun peeking through the buildings. This was important to Reeves for the gorgeous sunset shot behind Batman at the end of the film, inspired by the breathtaking lighting in Wong Kar Wai’s “In the Mood for Love.”

“What I wanted is a shot of Gotham where it’s Batman in the foreground and soft [in the background],” the director told IndieWire. “The set was much smaller than it looked so you can actually extend the environments and, to me, the most important thing is that it has the authenticity of light. And ILM used it to create a cityscape around your actors in a way that was totally photoreal. And that’s what we were trying to do to push the limits of [StageCraft].” 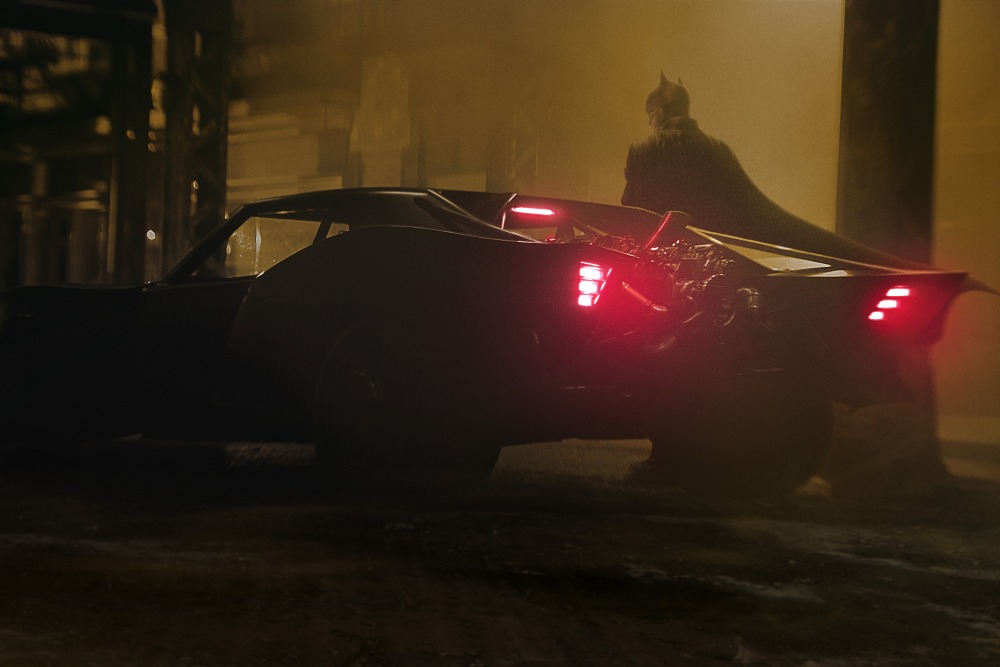 Fraser’s retro lighting scheme was built around the idea of creating practical in-camera effects with the large-format Alexa LF camera, using custom-designed ALFA anamorphic lenses. These included lens flares that appear as caustics bouncing off waterdrops stuck to the camera. Fraser also made his own filters by adding silicon from a caulking gun to the square pieces of glass. These lighting imperfections, enhanced by the use of fluorescent and sodium vapor lights, mirrored the imperfections of both Batman and Gotham.

These lighting imperfections were on display most dramatically in the chaotic Batmobile chase, shot at the Dunsfold Aerodrome after determining that a race track would allow for more control, and to convey the chase from Batman’s perspective (inspired by the legendary chase in “The French Connection” with Gene Hackman’s Popeye Doyle).

“We had this plan to shoot a huge section of it in Liverpool,” said Lemon. “That was a week before we had to shut down because of the pandemic. By the time we got to the other end of our hiatus, we had time to start things up again. Matt returned back his original plan from the script, which was a car chase that would take place on a freeway with hydroplaning tractor-trailers. But because of the logistics of a freeway scene, we shot instead at the Dunsfold Aerodrome. But there was a limited amount of space to shoot and it didn’t have twists and turns, it didn’t have overpasses, and, most importantly, it didn’t have rain.”

That’s where Weta came in. Aside from recreating Fraser’s in-camera lighting effects through virtual cinematography in comp, they were principally tasked with the action beats for the all-CG portion of the chase in post-vis.

“We added rain and replaced a lot of the vehicles, but they realized that they needed help with some of the clarity of the chase, particularly when the crash happens after Penguin slams on the brakes and the truck behind him starts hydroplaning, which starts a series of multi-car pileups and the fuel truck explosion,” said Weta’s VFX supervisor Anders Langlands. “We had to figure out how to make the beats work fluidly for an audience to see through the dark and the rain. But the cornerstone of it is Greig’s work and a lot of the choices that he made as DP decided the way we approached light sources, and we were able to match that with our Manuka renderer.”

But it wasn’t easy for some of the more complicated shots without virtual lenses. Weta had to make their own versions from scratch.

“When I looked at Greig adding those globs of silicon to the filters, I was slightly terrified because now [Weta] was going to have to replicate it,” Lemon said, “and as we added virtual elements to match that crazy distortion, Ander’s team got really excited about integrating the CG with the rest of the photography.”