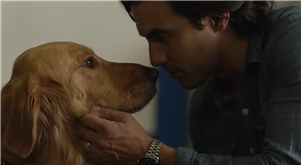 Get ready to add one more title to the ever-growing list of talking dog movies. 20th Century Fox has released the official trailer and teaser poster for Fox 2000’s upcoming “The Art of Racing in the Rain,” which is being billed as “a heartfelt tale narrated by a witty and philosophical dog.” The dog happens to be voiced by none other than Kevin Costner, and his human family includes the buzzy duo of Milo Ventimiglia and Amanda Seyfried. The tagline? “Meet the dog who showed the world how to be a human.” If that doesn’t pique your interest, maybe you’re not…human?

The official synopsis reads: “Based on the best-selling novel by Garth Stein, ‘The Art of Racing in the Rain’ is a heartfelt tale narrated by a witty and philosophical dog named Enzo (Costner). Through his bond with his owner, Denny Swift (Milo Ventimiglia), an aspiring Formula One race car driver, Enzo has gained tremendous insight into the human condition and understands that the techniques needed on the racetrack can also be used to successfully navigate the journey of life. The film follows Denny and the loves of his life — his wife, Eve (Seyfried), their young daughter Zoe (Ryan Kiera Armstrong), and ultimately, his true best friend, Enzo.”

The movie also features turns from such beloved character actors as Gary Cole (“Veep”), Kathy Baker (“Edward Scissorhands”), and Al Sapienza (“The Sopranos”), though they don’t appear in the trailer. Instead, Costner narrates the maudlin proceedings with the grizzled wisdom of a sentient golden retriever, over music that definitely warns of a tearjerker. Comedy ensues when the two lovebirds first connect, and Enzo has to deal with a new rival for Denny’s attention. It’s unclear how the whole Formula One racing thing plays into the plot, but it’s safe to assume that Denny’s life will be in danger at some point, and Enzo will be the one to save him. Or vice versa.