Carol Vorderman, 59, regularly hosts her Sunday morning radio show with Hollyoaks star Nathan, covering a whole array of topics and speaking with special guests. Having gained quite a following after his role of Buster Smith on the Channel 4 soap, bosses could have the actor in mind for Strictly Come Dancing’s first-ever socially distanced season. With so many famous faces rumoured to be taking part in the BBC dance programme, the soap star has now addressed whether he will be strutting his stuff on the dance floor.

Nathan has also had starring roles on Coronation Street, Emmerdale, Casualty and Doctor Who spin-off, Torchwood.

For his portrayal of child groomer Buster on Hollyoaks, the actor also won Villain of the Year at the British Soap Awards last year.

With his character being jailed for his abusive behaviour, later this autumn, Carol’s co-star will be returning for a brand new storyline.

This could be another perfect inning for the radio presenter to be a contestant on the dance show, so will viewers be seeing him showcasing his talents?

Speaking with Express.co.uk, the award-winner said: “If the opportunity came up, I’m sure I would consider it.” 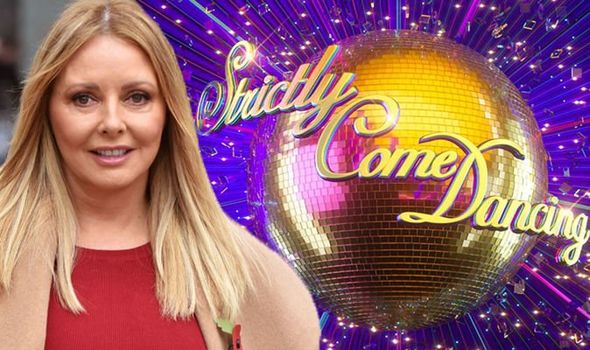 Carol herself took part in the second season of Strictly back in 2004 but was voted out in week two of the competition.

Therefore, she could give Nathan some insight into how the programme works and what he could do to keep the viewers on side.

The former Countdown star has previously offered her perspective on the all-star casts bosses are able to acquire.

“I think it’s unfair that you have stage school graduates… there should be some handicap somewhere,” she told Express.co.uk.

I’m sure I would consider it

“You just can’t compare! It’s like having someone that has swum for their county and another who hasn’t swum before and telling them to have a race.”

Viewers won’t have to wait long to find out who is a part of the official 2020 line-up as the first contestant will be unveiled on Tuesday evening.

Mirroring last year’s announcements, the first celebrity set to participate on the show will be revealed on The One Show.

As the 2020 season is set to be shorter than usual, the full line-up will be completed by the end of the week.

Fans of the programme will be breathing a sigh of relief as there was concern proceedings would be put on hold as a result of the coronavirus pandemic.

Head judge Shirley Ballas, 59, and her co-stars Craig Revel Horwood, 55, and Motsi Mabuse, 39, will be back to offer their critique on the performances.

Discussing the show’s return, the latter explained: “I’m excited to breathe in the Strictly air again and to be part of the buzz.

“I’m like lightning; I came, did my thing on Strictly and I think I left an impression. This year, I will be able to leave even more ‘Motsi’ behind,” she told HELLO! Magazine.

CAN’T SEE THE POLL BELOW? CLICK HERE TO OPEN IN YOUR BROWSER

Viewers are certainly excited for Strictly’s return and who the contestants will be, with one writing: “We must be due #Strictly announcements very soon?!”

Another added: “Coming out of #Strictly hibernation at last at the start of what I believe could be celebrity reveal week.

“How is everyone? Ready for some dancing I bet? Still got a little while to wait but it’s getting closer. #startdancing,” they continued.

A third commented: “I’ve just realised…if the show was happening like usual and coronavirus wasn’t around, then the launch show would be this Saturday #Strictly.”

Strictly Come Dancing 2020 begins later this year on BBC One.