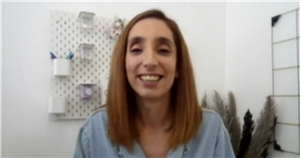 Stacey Solomon's sister Jemma hilariously revealed the "most annoying thing" about her sibling on Friday's Loose Women as she appeared via video for a joint interview.

During the candid chat, host Nadia Sawalha asked Jemma, 33, to reveal the "most annoying" thing about Stacey, 31, from a sister's point of view to which she claimed she is the "tidier" sibling.

Jemma, who is otherwise known as The Label Lady on Instagram, joined the show to discuss her booming business venture, which has amassed a whooping 450,000 followers on Instagram.

Nadia, 56, said: "What's the most annoying thing about Stacey, from a big sister's point of view? You've got 20 seconds!" To which Stacey hilariously replied with: "Oh, cheers Nads!"

Jemma revealed: "What's the most annoying thing… she thinks she's the tidier sister for sure. Tells everyone!"

To which a shocked Tap To Tidy Queen Stacey replied with: "I am! You think you're the tidy one?"

Stacey and Jemma are just 18 months apart in age and they have previously spoke before how tight knit they both are.

However, the two siblings admitted that there was a difficult time in their life when they were growing up as teenagers and their father had to build them their own space.

Stacey revealed: "We hated each other!" While Jemma added: "We used to argue, we were typical teenagers, [Dad] ended up building a wall in our bedroom to give us our own space."

Elsewhere during the chat, Jemma revealed that she and Stacey first duped her now-husband Lee when she first started dating him.

She said: “When I met my now-husband, we met in a nightclub and I said, ‘You’re never going to remember who I am, what I look like.’ He said, ‘I will.’

Become an OK! VIP and get all of our exclusive interviews, videos and stunning photo shoots sent straight to your inbox every week!

You'll receive an email with stories exclusive only for OK! VIP members, including celebrity house tours, baby reveals, wedding snaps and so much more!

"He turned up at my house, so I said to Stacey, ‘Can you go and get in the car with him please because he thinks he knows what I look like?’ She got in the car and he drove off with her!”

Amidst laughing, Stacey added: “I had to say [to him], ‘Sorry, I’m not Jemma, can you drive me back home please?”

Loose Women continues on weekdays at 12:30pm on ITV.