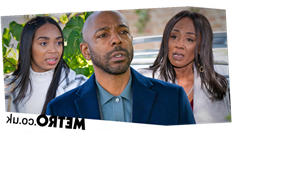 It’s been something of a tough year year for Denise.

After she discovered that Raymond’s parents had died in a car accident, she became determined to keep Phil Mitchell (Steve McFadden) out of their son’s life.

However, she ultimately agreed to help Phil in his mission to rescue their child from the clutches of gangster granny Ellie Nixon (Mica Paris).

In the weeks and months that have passed, Denise has attempted to make Raymond feel welcome in his new home, and she aims to have a nice traditional family Christmas for the young boy.

Little does she know what’s in store….

Yes, over the festive season, she comes face-to-face with murderer Lucas, and — in scenes previewed in last week’s Christmas trailer — she’s absolutely terrified.

‘It’s absolute terror when she sees him,’ said actress Diane Parish. ‘What is he here for? She then thinks: “Not now. Not when I have got Raymond, this very small person to protect.” But of course her first emotion is terror.

However, Denise ultimately gets an even bigger shock, as she learns that daughter Chelsea (Zaraah Abrahams) is in her dad’s presence.

‘She feels shocked and betrayed and then worries for Chelsea and what she’s doing.’ Diane continued. ‘She should be really thrilled and happy to see her daughter, who she hasn’t seen on Christmas Day in a while, so that is a lovely thing but she shouldn’t have been standing next to her murdering father.’

Actor Don Gilet — who portrays Lucas — added: ‘All actors love being given the opportunity to play complex villainous characters and I’m no different in that respect.

‘In real life I have not murdered anyone and have no villainous tendencies, so this was a happy challenge to step once again into Lucas’s shoes and out of my usual approachable, affable, cheeky-chappy persona.’