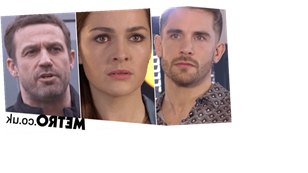 Sienna has found herself unable to resist Warren in recent months, and — after a kiss at the hospital last year — she ultimately succumbed to her desires and slept with him.

She felt incredibly guilty afterwards, and resolved to put an end to her dalliance with her ex, but she was ultimately unable to do so, and thus they slept together numerous more times.

What’s more, she kissed Warren over the festive season — something which Liberty Savage (Jessamy Stoddart) witnessed.

However, Sienna is hellbent on staying faithful to Brody — as previewed in the new trailer — but the excitement of Warren proves rather difficult for her to resist.

Her answer remains to be seen, but there’s more heartache ahead, as Brody finds himself attracted to newcomer Summer Ranger (Rhiannon Clements) — and they share a kiss, which Sienna seemingly witnesses!

What’s more, Summer catches Sienna kissing Warren, and soon enough, Brody discovers that his girlfriend has been having an affair behind his back!

What will happen when he confronts Sienna? Is this the end of their relationship?