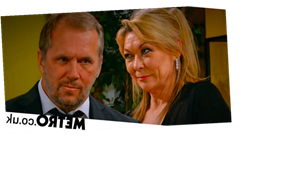 Kim Tate (Claire King) set her sights on Will Taylor (Dean Andrews) in Emmerdale tonight (December 31), and it appears as if Will doesn’t mind at all.

Upon returning to the village earlier this month, Kim found Will on her property.

She ultimately agreed to let him off after he claimed he was poaching, but it was clear that she wanted something in return — and she finally decided to cash in tonight.

With New Year’s Eve having arrived, Kim was preparing for a lavish dinner, and — after bumping into Will at the cafe — she devised a plan to make her night all the more perfect.

Yes, she ordered that he be her driver for the evening!

Will was taken aback, but knowing that he had little choice, he ultimately decided to give Kim what she wanted.

He later arrived at HOP looking very dapper in a suit, and Kim was impressed.

Dressed to the nines, the Home Farm businesswoman decided that she wanted to get to know Will better, and therefore gave the event a miss.

The two villagers got to know one another over a glass of champagne, and it was clear that there was a spark between them.

Kim was ultimately summoned back home, but she made clear that she’s very much interested in picking up where she left off with Will in the future.

Will passion ensue between Kim and Will?

If so, how will Harriet Finch (Katherine Dow Blyton) react?