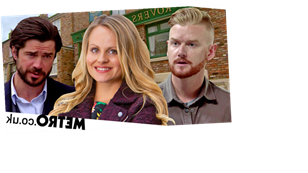 Gary is shocked when he discovers from Brian (Peter Gunn) that Bernie (Jane Hazelgrove) located a watch in the woods, and subsequently sold it to Sarah.

Fearing that his secret could come to light, he orders Bernie to retrieve the watch, and Bernie does as she’s told — even offering double what she paid for it.

However, Sarah come to realise that it’s Gary who desperately craves the item, and thus she refuses to sell.

With her interest having been well and truly piqued, Sarah heads round to speak to Gary, and outright asks him if he killed Rick!

She doesn’t stop there either, as she opens up his boot, where she finds a shovel, latex gloves and a bag.

Left with no other choice, Gary comes clean, and tells Sarah that he did it, but confirms that he did so to save her and the kids, before revealing that he’s never stopped loving her!

Sarah is shocked, and runs off — dialling 999. However, she ends up running into the path of a delivery van, and Gary — who evidently gave chase — pushes her out of the way in an effort to save her.

As a result, he ends up getting hit by the van and is left out cold on the cobbles.

Sarah is shocked by what has transpired, and pleads with Gary to wake up, as Tyrone (Alan Halsall) — who’d witnessed the whole thing unfold — phones for an ambulance.

Adam (Sam Robertson) and Maria (Samia Longchambon) arrive at the hospital, and Sarah describes how she was on her phone and Gary stepped out in front of her to save her life.

However, Tyrone reveals that he saw Sarah running from Gary prior to the accident.

Adam suspects there is more to this story than meets the eye, but will Sarah come clean?

The solicitor tells the police that Sarah is simply too shaken up to give a statement right now, but will he get to the bottom of why his wife is behaving in such an unusual fashion?

Will Sarah reveal all? Or will Gary’s decision to save her life result in her ultimately keeping his secret?

If so, could this spell the end of her marriage?