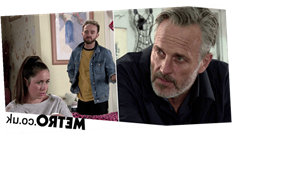 As soon as the sinkhole appeared in the Platt’s garden in Coronation Street, Ray Crosby (Mark Frost) tried to sweet talk David (Jack P Shepherd) into selling the house but with David very rarely missing a trick, he immediately sensed something wasn’t right.

But when Gary (Mikey North) started working for Ray, it didn’t take him long to succeed in his plan and David ended up selling the house to the mysterious ‘Roxy’.

After David, Abi (Sally Carman) and Gary set off to track down the water board engineer Ray bribed to investigate the sinkhole, their plan was scuppered after they discovered Colin had vanished. With Ray’s anger growing at the resident’s constant attempts to sabotage him, he creates a new plan against David and Shona (Julia Goulding) soon in the hope it will stop them from interfering.

David is outraged to discover No.8’s locks have been changed, and later learns his new home is on Shona’s old estate – leaving him horrified.

David accuses Ray of rehousing them there out of spite, but Ray darkly warns David things will get nasty if he refuses to leave No.8.

Ray will clearly do whatever it takes to make sure his development goes ahead, but can David put an end to him and his family moving out of his home?