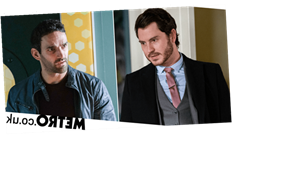 Kush Kazemi’s (Davood Ghadami) exit in EastEnders remains a mystery. We know Davood is set to leave the soap this year after playing Kush for seven years, but aside from his gambling addiction storyline, there isn’t any obvious suggestions on how his final scenes could play out…

But is that all about to change?

Gray (Toby-Alexander Smith) has been keeping the fact that he killed Chantelle (Jessica Plummer) a secret for months, and has added to his ongoing guilt after murdering Tina (Luisa Bradshaw-White) following her discovery that Gray abused and killed his wife.

Since killing Tina, Gray has kept up his pretence, continuing his kind and friendly façade in front of the Walford residents.

However, it’s safe to say Gray’s guilt is increasing after killing again, but could he have blood on his hands once more if he kills Kush in a jealous rage?

Gray watches Kush and Whitney (Shona McGarty) playfully wind each other up.

Jealous, he gets an idea…

Gray’s anger has led him to kill twice in the past…but could he kill for the third time and murder Kush so he can have Whitney to himself?