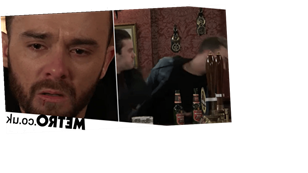 If there’s one thing that David Platt (Jack P Shepherd) is guilty of doing then it’s closing himself off, lashing out and going into self destruct mode when faced with a crisis in Coronation Street.

And his wife Shona (Julia Goulding) being unable to remember him after a near death shooting and demanding a divorce certainly counts as a crisis.

Tonight, in order to block out his bad feelings, he drank with Alina Pop (Ruxandra Porojnicu) and one thing led to another, with the pair sleeping together. She was clearly a rebound for David and when Seb Franklin (Harry Visinoni) called round over his concern for Alina, David was amused as she told him to get out.

Later, David deliberately goaded Seb in the Rovers in front of everyone, boasting that he was just sore because his ex had moved on from him and Seb snapped, punching him across the face.

David’s taunts continued and Nick Tilsley (Ben Price) had to lead him away – after which Alina put David in his place and deemed him a mistake.

Meanwhile, Emma Brooker (Alexandra Mardell) was left shattered as Seb had exposed his true feelings for Alina, the ones she had always feared and he had always denied.

As their relationship hit the rocks, David was much more sombre back home and as a worried Nick left David to his devices, he appeared empty and tearful as the weight of his crushed world overwhelmed him.