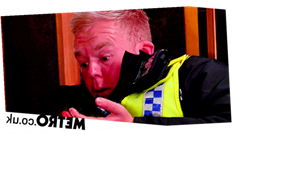 There are terrifying scenes tonight in Coronation Street as Scott Emberton’s (Tom Roberts) robbery on the Bistro goes badly wrong, leading to police officer Craig Tinker (Colson Smith) being shot and left bleeding on the ground – but will he die?

Scott has tried to lure Johnny Connor (Richard Hawley) into the dangerous plan under the threat of him telling the truth to Jenny (Sally Ann Matthews) about his criminal past.

But as Johnny panics upon seeing the firearm and argues that he can’t go along with this, he ends up collapsing with an MS attack and begging for his medication.

Spiteful Scott instead knocks him out and abandons him before putting on a terrifying Halloween disguise and entering the Bistro armed.

Craig soon gets the call on his radio but, aware that Faye is in danger, he doesn’t wait for back up and instead enters the scene of the crime, launching a chair at Scott.

In the melee the gun goes off and Craig falls to the ground, having taken the bullet.

As Scott flees, leaving Craig to die, will this be the end of the beloved police officer?

And will Johnny be found in time?

Coronation Street continues on Monday October 26 at 7:30pm and 8:30pm on ITV.