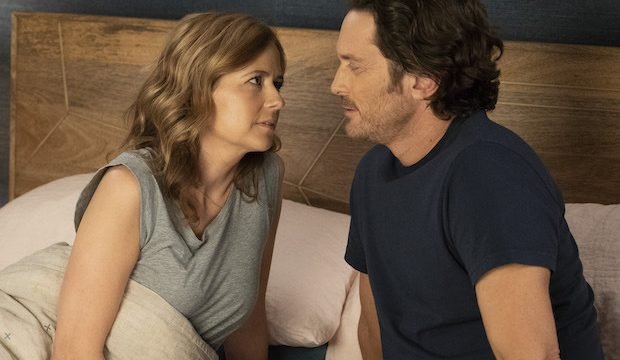 Looks like fans of Splitting Up Together won’t find out whether Lena and Martin’s reunion was going to stick: ABC has dropped the ax on the low-rated romantic comedy, cancelling it after only two seasons, TVLine has confirmed.

The often swoon-worthy series from Emily Kapnek (Suburgatory) starred Jenna Fischer and Oliver Hudson as parents of three whose divorce gave them a new perspective on their marriage. In April’s Season 2 finale, the couple moved into their garage apartment Lisa Apple, the woman Martin dated while he and Lena were apart, and the ex-lovers’ baby girl, Annie.

Charming as the show was, it struggled in the Nielsens. Splitting Up was ABC’s third-lowest-rated comedy of the season, averaging just 0.66 in the demo. (Only Fresh Off the Boat and Speechless fared worse.) What’s more, in TVLine’s recent poll of bubble shows viewers most wanted to see renewed, the series ranked 20th of 29 options. (Ow.)

Splitting Up Together was one of several ABC sitcoms to get bad news on Friday: The network also cancelled freshman comedy The Kids Are Alright and the Minnie Driver-led Speechless. Our handy Renewal Scorecard has been updated accordingly.

So, are you bummed about being forced to break up with Splitting Up Together? Or did you feel like the story had run its course when Martin and Lena reunited? Hit the comments.