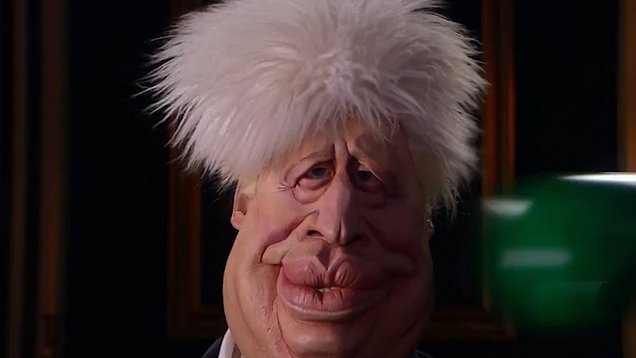 Satirical comedy Spitting Image will head to the West End next year for a live production, and it sounds like it will be particularly savage.

Puppets from the series, which returned to screens in 2020 for the first time in 24 years, will be part of a production which the show’s co-creator says ‘unlike Boris (Johnson)’ will be delivered ‘with no shortcuts’.

Spitting Image co-creator Roger Law said: ‘The last month has shown Spitting Image has been far too kind to Boris and his pals on TV recently.

‘So to deliver the kind of sharp satire and laughter they deserve Spitting Image have decided to make a live production.

‘Whilst Boris and his boys and girls level themselves ever upwards to the sunny uplands… we are preparing to level them down to size in a West End theatrical show.

‘We can’t give too much away at this time, possibly because we’re still writing it, however, unlike Boris, we will deliver with no shortcuts.

‘I’m afraid there will be lies because it’s Boris.

‘I can tell you that we have devised a spectacular show-stopping ending, a huge carnival head of Boris that fills the stage will open its mouth and spew a snowstorm of paper lies all over the theatre.

‘The lies printed on small pieces of paper will flutter down on to the audience who will be able to pick up their favourite Boris untruths and take them home as mementoes.’

Further information for the live production will be announced in due course.

The popular sketch show, featuring puppets of well-known figures, made its return on BritBox last year and has featured names including Dominic Cummings, Greta Thunberg, Donald Trump and the Duke of Sussex.

It returned to BritBox for a second series in September with sports stars Gareth Southgate, Harry Kane and Marcus Rashford featuring. Tennis ace Emma Raducanu was also given the Spitting Image treatment in the returning series following her US Open triumph.

The show originally ran for 18 series between 1984 and 1996 and was watched by 15 million viewers in its heyday.

The live show will be produced by Avalon.

Seasons one and two of the new Spitting Image are available to watch on BritBox.