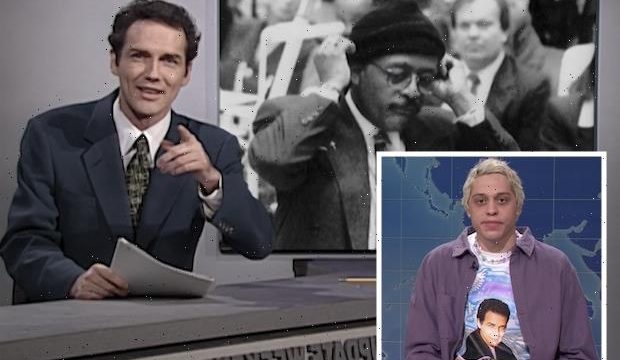 The beloved ’90s cast member (and former Update anchor) died on Sept. 14 following a private battle with cancer. His passing was acknowledged during the Season 47 premiere by current Update fixtures Colin Jost and Michael Che.

“It’s a bittersweet night for us,” Jost said. “Norm is the reason I ever wanted to do Weekend Update, so tonight we thought we’d turn the last few jokes of Update over to Norm.”

What followed was a montage featuring cracks at President Clinton and, naturally, O.J. Simpson, whose infamous murder case was the inspiration behind some of Macdonald’s most memorable Update jokes.

Prior to the clip package, Pete Davidson appeared opposite Jost and Che wearing a vintage Norm Macdonald t-shirt.

Macdonald was an SNL fixture from 1993 to 1998, and served as sole anchor of Update for three seasons. As for his sketch work, he’s perhaps best remembered for playing Burt Reynolds, foe of Will Ferrell’s Alex Trebek, on Celebrity Jeopardy.

“Today is a sad day,” an SNL spokesperson said at the time of Macdonald’s passing. “All of us here at SNL mourn the loss of Norm Macdonald, one of the most impactful comedic voices of his or any other generation. There are so many things that we’ll miss about Norm — from his unflinching integrity to his generosity to his consistent ability to surprise. But most of all, he was just plain funny. No one was funny like Norm.”

What did you think of SNL‘s Norm Macdonald remembrance? (Video will be added as soon as it’s made available.)