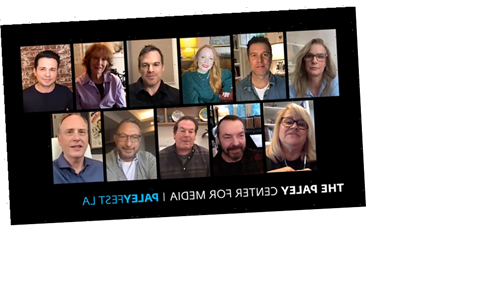 The cast and crew of Six Feet Under reunited for the first time in 15 years this week at PaleyFest LA, sharing recollections of their time on the show and their thoughts on its legacy.

Early in the conversation, Ball and Janollari reflected on their experience pitching Six Feet Under to HBO. “I think it was the day after Alan racked up a million nominations for American Beauty, and they sat there and loved what Alan had to say. The next day, [they] called and ordered the pilot,” Janollar said. “We essentially shot 98% of exactly what Alan wrote, and I think they had one big note, which was, ‘Just make it more f*cked up.’ ”

“I just remember getting that note and thinking, ‘I will never get this note again in my life,’ ” Ball added.

For the series’ entire team, working with HBO in the early 2000s (the show premiered in June 2001) could not have been a bigger opportunity. “HBO was the greatest. I think it was and still is, in many ways,” said Greenblatt. “Sopranos was on the air, and Sex and the City, and The Wire, and some of the greatest shows in the history of that network. We were so honored to join that lineup.”

At the time, streaming services didn’t exist, which meant there were few places other than HBO to put a show like Six Feet Under, which centered on the Fishers, a dysfunctional Los Angeles family running an independent funeral home.

What the premium cabler offered, Greenblatt said, was a “premium experience on every level.”

For Janollari and Poul, working with HBO was the “complete opposite” of what they had just recently experienced with Ball while trying to get a sitcom off the ground at a broadcast network. At first, Greenblatt referred to the network as one “that shall remain nameless,” joking that “it begins with the letter A.”

Poul later got specific, saying the show was the ABC sitcom Oh, Grow Up—which was canceled in 1999, after its first season aired. On the sitcom, Janollari says, “There was no support, it was adversarial. There was lying, there was meddling in the creative.”

“So [Six Feet Under] was a blessed experience,” he added, “from start to finish.”

In the HBO show’s early days, though, Ball and his team made sure to get their revenge, crafting a gag at the expense of ABC exec Stu Bloomberg, naming a corpse in one episode Mr. Bloomberg. “It’s just purely a coincidence,” Ball deadpanned. “Nothing to do with reality.”

Like Six Feet Under‘s EPs, each cast member had treasured memories to share of the show’s early days—so much so, that they repeatedly choked up during the Zoom conversation. “There was something magic about the script. There was something magic about every bit of the process,” said Hall. “It was amazing, our first table read. It felt like I was meeting my family from a parallel universe, and it still does.”

“I’m so overwhelmed right now. Like my heart is beating out of my chest,” added Ambrose, “just because these people are so knitted into the fabric of who I am as an actor, and an artist, and a person.”

Krause recalled bonding with Hall over their shared experiences at New York University, while Rodríguez remembered Ball telling him that the part of Federico ‘Rico’ Diaz was written specifically for him. “It was the kindest, most gracious thing anyone has ever done for me,” he said.

Later, Poul and Greenblatt reflected on the show’s ascent into the upper echelon of prestige TV. Poul noted that as the show went on, it became a “talent magnet.”

“We had people calling us saying, ‘Put me on.’ Or the other thing was, ‘I’ll play a dead body,’” added Greenblatt. “People wanted to just be in that room.”

The conversation then turned to the series finale, which depicted the way in which each key character would go on to die. While Poul said “it meant that we never had to worry about doing a reunion movie 20 years later,” Greenblatt teased, “There’s always a way to reboot something.”

The show’s creatives reflected, in closing, on the legacy of Six Feet Under, which over the course of its five seasons won three Golden Globes and nine Emmys among its other accolades.

“It’s incredible how unique this show was,” Krause noted. “You couldn’t compare it to anything else, and that is rare, to get to do a television series that stands alone.”

Griffiths and Rodríguez added that the show was ahead of its time, in terms of the way it represented women, members of the Latinx community and others. “I think it gave permission to so many creatives to be truly brave,” Griffiths said.

“Whether [Ball] knew it or not, it was revolutionary,” Rodríguez added. “It really left an indelible impression.”

Greenblatt also took the opportunity to chime in on the show’s “quietly groundbreaking” nature. “Latinx, LGBTQ, female characters, a Black gay character. I mean, that was revolutionary in and of itself,” he said, “and those weren’t soapboxes that Alan and this great writers’ room was on. It was just this tapestry of characters, and it really reflected the world.”