Ms Begum left the UK at the age of 15 with two other East London schoolgirls in 2015 to join the Islamic State group. She had her citizenship stripped in 2019 by then-Home Secretary Sajid Javid and the Supreme Court has now ruled Ms Begum will not be allowed to return to the UK to fight for her citizenship case. Speaking about whether or not Ms Begum should be allowed back into the country, Good Morning Britain host Piers Morgan made his thoughts clear, slamming calls to allow her fight for her citizenship.

Piers stated: “I wouldn’t let any of the ISIS killers come back under any circumstances.”

He later added: “No regrets, had a good time until right the end when it all fell apart, when ISIS fell apart.

“This woman shows no remorse, no regrets, she’s a grown woman and has had time to reflect on what went on.

“But she has no regrets about it, she could look at severed heads in bins and it didn’t faze her remotely. 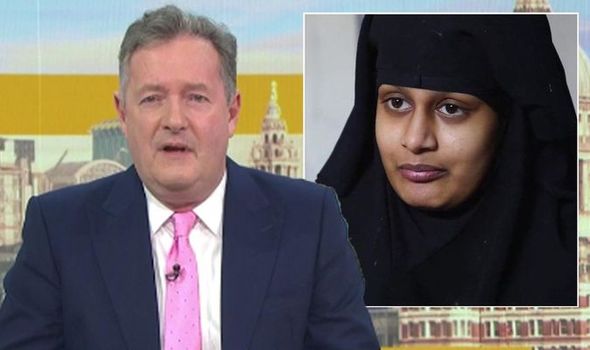 “I would say she does present a very clear ongoing danger to this country.”

Co-host Susanna Reid replied: “At the same time she was asked if she can change.

“It was part of the same interview series and she was asked if she could change or be rehabilitated.

“She replied, ‘I am willing to change, I actually do support British values, I’m willing to go back, settle and rehabilitate.’” 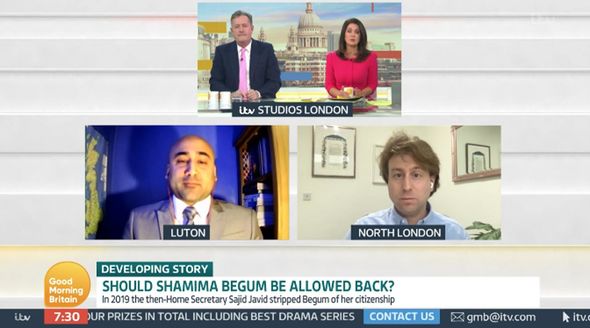 “But as things stand she is 21 now, she hasn’t denounced ISIS or said anything to criticise,” Piers hit back.

“Part of the reason they consider her to be a danger is her thinking, her ideology appears to still be stuck in this position that ISIS was not a bad thing.”

Many of those tuning into Good Morning Britain agreed with Piers and took to Twitter to comment.

One viewer posted: “Keep her out! While we’re at it why don’t we get all the known terrorists and throw them out the country! It’ll save innocent lives! Just a thought.”

A third continued: “I don’t always agree with @piersmorgan but when he’s right he’s right…”

However another argued: “She was radicalised here as young girl. Yes she needs to go to court and probably prison but she’s our responsibility.

“Her radicalisation happened on our watch. We are responsible.”

The debate came after Lord Reed, the president of the Supreme Court, said the government could prevent Ms Begum from returning to the UK, on Friday.

He said: “The Supreme Court unanimously allows all of the home secretary’s appeals and dismisses Ms Begum’s cross-appeal.”

Lord Reed also added the Court of Appeal “has mistakenly believed that, when an individual’s right to have a fair hearing… came into conflict with the requirements of national security, her right to a fair hearing must prevail”.

Good Morning Britain airs weekdays on ITV at 6am.