The One Show hosts Rylan and Alex Jones welcomed Top Gear stars Paddy McGuinness, Chris Harris and Freddie Flintoff to talk about the new series of the motoring show. The pair joked about how it wasn’t at all a serious motoring show as they shared a clip of Paddy driving a car while sitting on Chris’ knee.

After showing the clip to viewers at home, Rylan was quick to ask how comfortable it was for Paddy.

“Rylan, I’ve got to be honest, that was extremely uncomfortable,” Paddy commented.

“Because it was only a small car and Chris was kind of…ow!”

Viewers saw Paddy hit his head off a sloping wall behind him and instantly rush to hold it. 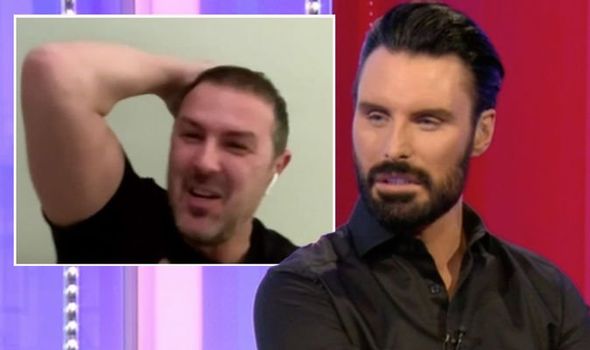 “Bl***y hell!” he exclaimed as he came back into shot rubbing his head.

“We should apologise as well if there was any language there,” Rylan said stepping in as Alex tried to stifle her laughter.

The host went on to joke: “This man is in charge of driving cars and he’s just knocked himself out in his own bathroom. Are you alright?”

“I’m alright, I’m alright,” Paddy replied as Rylan reminded him he was sitting under a “pitched roof”.

Going on to explain the clip shown from Top Gear, Paddy continued: “We were in one of those cars and Chris was more or less leant back and I was wedged on top of him.

“That was pretty uncomfortable but then in the next challenge, I was on the bottom and I had Fred sat on top of me.

“That is a different world of pain. I’ve got to tell you, he discovered his own DNA journey. It was not good.”

Chris, Freddie and Paddy will be back on television screens in Top Gear on BBC One on Sunday night.

Paddy previously said of the new series: “It had its difficulties this one, and that’s why we could only do four [episodes].

“We’re already starting to look at the next series and, fingers crossed, hopefully the restrictions will start easing and we will have a bit more licence.

“Who knows, we might even be able to do a trip abroad again.”

He added to Express.co.uk: “It’s good to be back with the boys again.

“It’s a pleasure, and we’ve kind of found our stride and we just keep trying to improve every series.”

While the series is shorter due to the pandemic, that’s not the only change as the show will air on BBC One for the first time.

Top Gear has previously been broadcast on BBC Two but due to soaring viewing figures it has been given a primetime slot.