Maths genius Carol Vorderman, 61, once again joined former MP and writer Gyles Brandreth on Friday’s staple Channel 4 show, Celebrity Gogglebox. The two sat beside each other to watch The One That Got Away when Gyles made a jokey comment while tucking into a banana. Chuckling, Carol told the 74-year-old he’s “put her off sex.”

“The one that got away,” Gyles whispered, before taking a bite out of the banana he was holding.

Carol laughed before taking a swipe at her pal: “You’re putting me off sex forever, Gyles by doing that. Having that banana.” 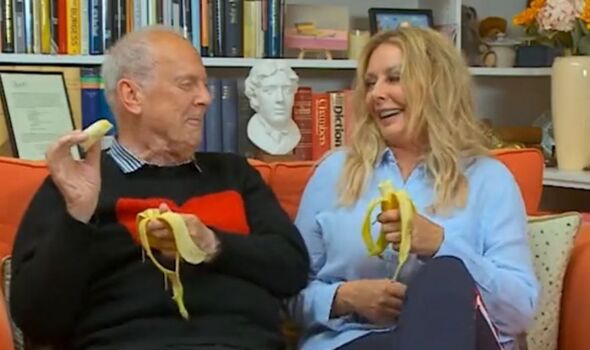 “You sound like my wife,” the journalist quipped as the pair began laughing again.

The latest innuendo came as the two friends made their latest Gogglebox appearance, with their banter from previous weeks having a similar tone.

Recently, Carol deflected a naughty question from Gyles while they watched Fifty Shades of Grey.

As they watched the famously adult film, a bemused Gyles turned to Carol and asked about her preferences in the bedroom. 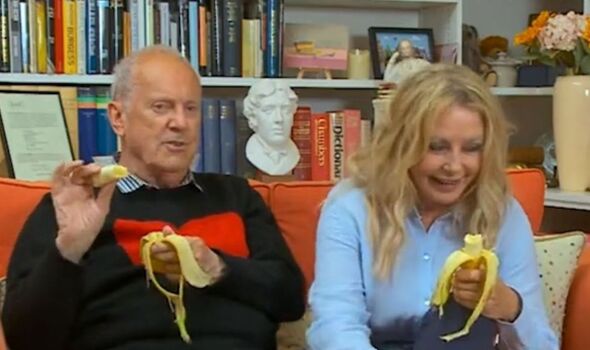 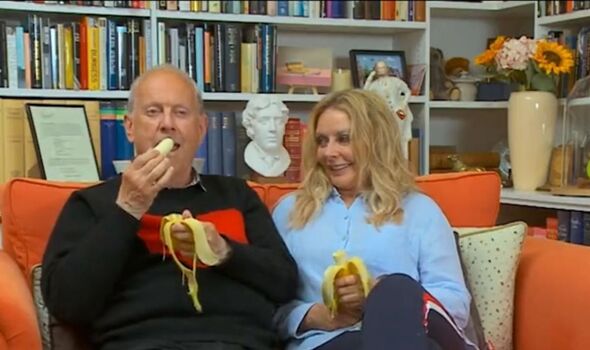 “My wife wouldn’t allow me to watch this,” he joked to the Pride of Britain presenter, making her laugh as the film began.

“I’m a dominant,” Christian could be heard telling Anastasia during the film.

“A dominant,” Gyles reflected. “Are you a dominant, Carol?

“I’ve never asked this before. Are you a dominant?”

As Carol began to giggle again, he continued: “I’ve known you for 40 years, I’ve never asked you.

“Are you a dominant?” he repeated determinedly.

While Gyles has been on Celebrity Gogglebox before, this series has been Carol’s debut on the popular show.

In the past, Gyles was paired up with Dame Joanna Lumley.

Fans were delighted to hear Carol would be making an appearance a few weeks ago, and she’s remained on the Friday night show ever since.

This season saw Carol make a comeback to the channel; that launched her career, although the two shows couldn’t be more different.

Carol is best known for presenting Countdown between 1982 and 2008, and her return to the broadcaster sees her putting her feet up to watch telling rather than solving brain-teasers.

While Gogglebox has been adored by fans since 2013, the celebrity spin-off only started in 2019.

Now in its fourth series, the famous face edition is as popular as ever.

The line-up this year includes Rylan Clark and his mum Linda, Martin and Roman Kemp and Shaun Ryder and Bez from The Happy Mondays.