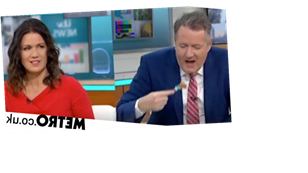 Piers Morgan took the plunge and tried the recipe that has divided the nation – Weetabix and baked beans.

Social media was sent into a frenzy yesterday when Weetabix tweeted out their new recipe and received a divisive response, to say the least.

It immediately went viral with many grossed out at the thought of whacking beans on top of the dry biscuits, and every brand from Lidl to Domino’s Pizza and even the NHS and local police got involved to mock Weetabix.

So naturally, Piers just had to give it a go during Wednesday’s Good Morning Britain.

Trying to justify the head-scratching combination, Piers said: ‘Think about it, it’s just wheat and baked beans. You have it on toast, why wouldn’t you have those two things?’

Susanna Reid at least had some sense and argued: ‘I’ll give you a reason why at least, because Weetabix is so dry until the point they get wet and then they’re really mushy.’

It did nothing to deter her co-host, who had a spoonful of the meal but it seems the production team got it wrong from the start.

‘It would’ve been better being hot, obviously,’ Piers noted.

Offering his review, he then said: ‘Interesting. It’s different but interesting. I’ve given up bread, I’ve seen how successful it is with you giving everything up.

‘I think this might be the new beans on toast.’

Ooh, a bold statement Piers that we find very hard to believe.

He then turned to Dr Hilary Jones for advice on whether Weetabix’s new version is healthier for him.

Instead, Dr Hilary replied: ‘I want to warn Susanna that it’s really high in fibre.’

Referring to viral queen Jackie Weaver, Sainsbury’s said: ‘Beans have no authority here, no authority AT ALL.’

Sky News chimed in: ‘*unplugs Sky broadband to save the rest of the nation from seeing this*.’

Domino’s Pizza UK quipped: ‘Us: Pineapple on pizza is the most controversial food ever. Weetabix: Hold my spoon.’