When addressing critics who may have misunderstood the film, the Horace Badun depicter insists that it is not an ‘edgy and dark movie [because] you’re not watching dogs getting made into coats.’

AceShowbiz –Paul Walter Hauser won’t let anyone say negative things about “Cruella“. Having found the Disney film he’s starring in was labeled “uncool” by a movie review, the Horace Badun depicter set aside time to hit back at the “mean-spirited” critic.

The 34-year-old offered his clap-back when speaking to Insider. “Richard Lawson at Vanity Fair, he’s good at his job. I’m sure he’s a good guy. I just read that review, it was one of maybe six reviews I read, and he was kind of having fun being mean-spirited, sort of doing his word play instead of dissecting the film,” he said. “I just felt it was a cheap shot so I defended my movie.”

“I think we made a great film, it may not be for everybody, but it does so many more things right than it does wrong,” the actor/comedian added. “If you feel you hated two things, but we did these five other things great, then you can’t tell people not to see the movie. That’s ridiculous. It’s like me telling you not to eat at a restaurant because I didn’t like the toilet paper in the bathroom and my waiter was unattractive. You would be like, ‘Um, how was the chicken?’ So that’s my whole take on film criticism.”

Paul further emphasized that “Cruella” is not “an edgy and dark movie.” He then explained, “You’re not watching dogs getting made into coats. It’s an action-adventure-crime-comedy movie with a lot of heart and if you don’t like Emma Stone and Emma Thompson you should probably get your pulse checked.”

Paul has previously called out Richard for declaring that he “disliked” the movie, which was released in theaters and on Disney+ on May 28. ” ‘CRUELLA’ is the origin story slash heist movie slash [The Devil Wears Prada] slash London Punk origin story you definitely don’t need. Really disliked this movie,” Richard argued on Twitter. 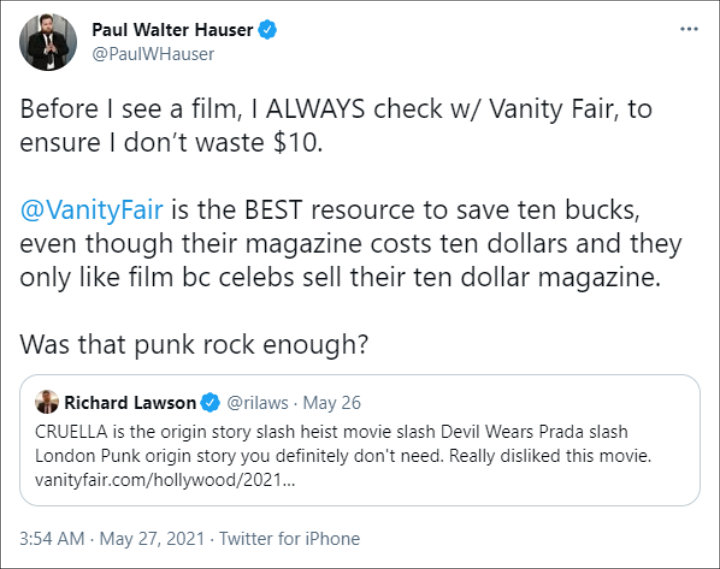 Paul Walter Hauser fired back at Richard Lawson for writing a bad review of ‘Cruella’.

In response to the tweet, the “I, Tonya” star sarcastically penned, “Before I see a film, I ALWAYS check w/ Vanity Fair, to ensure I don’t waste $10. @VanityFair is the BEST resource to save ten bucks, even though their magazine costs ten dollars and they only like film bc celebs sell their ten dollar magazine.” He then added, “Was that punk rock enough?”