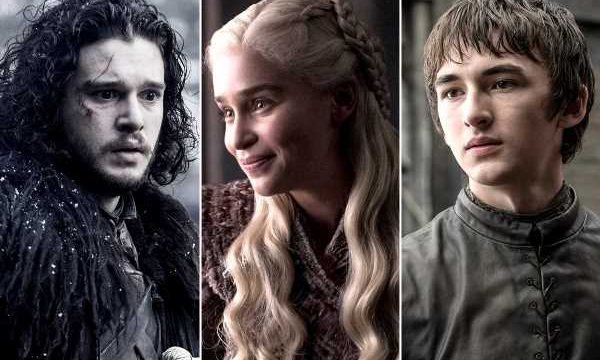 When it comes to predicting what will happen on Game of Thrones, all bets are off — except for Vegas oddsmakers, that is. Ahead of the season premiere, experts weighed in about who will be the future ruler of Westeros, and the results are sure to shock even the most die-hard GoT fans. May the odds be ever in your favorite character’s favor.

WARNING: The following contains spoilers from seasons 1 to 7.

As of April 12, the Vegas oddsmakers behind live betting website SportsBetting.ag listed Bran Stark as having the best odds of becoming the next ruler of Westeros. Fans — not to mention his more qualified older sisters, Sansa and Arya — might be shocked by this twist, as the younger Stark has no official claim to the throne, but upending expectations is standard fare for the GoT writers and producers.

Although the odds continue to shift by the hour, Bran’s time-traveling and mystical powers as the new Three-Eyed Raven do give him an upper hand that no one else possesses, and could be the key to his taking the Iron Throne. Either way, with his omniscient abilities, Bran probably has a better idea than the rest of us.

Daenerys is a close contender for the Iron Throne, coming in just behind Bran Stark. Thought to be the only living heir to Westeros’ former ruler, the Mad King (until word gets out about Jon Snow’s true identity, that is), she has the claim to the throne in her corner.

Having overcome seemingly insurmountable obstacles and literally setting fire to her enemies, she is seen as much a formidable force as she is a fan favorite.

And there’s the consideration of her dragons, which were essential to her family’s conquering the Seven Kingdoms in the first place — those probably don’t hurt her chances, either.

If he can come back from the dead, he at least has a shot at the throne, right? Oddsmakers seem to think so, as the virtuous Snow is currently third in the running. Formerly known as the illegitimate child of Eddard Stark, the underdog-turned-King in the North was revealed to be the legitimate child of Rhaegar Targaryen and Lyanna Stark, which gives him a claim to the throne and also makes him Daenerys’ nephew — which might throw a bit of a wrench into their new relationship, and one of their chances at taking the Iron Throne.

The oldest Stark sister has transformed from a petulant child obsessed with royal titles to a poised and powerful young woman, no longer a political pawn but a key player when it comes to bargaining and strategizing — which makes her a solid contender for the next ruler of Westeros.

Currently the fourth most-likely to take the throne, Sansa has proven herself to be resilient in the face of innumerable betrayals, and to have learned a thing or two along the way about how to inflict her own (here’s looking at you, Littlefinger). Having already reclaimed Winterfell, she’s made it clear that she’s a smart and ruthless contender when it comes to the Iron Throne.

To borrow from Pirates of the Caribbean, Gendry is the Will Turner of GoT: a blacksmith with a knack for wielding the weapons he crafts and a secret bloodline that makes him more of a key player than he first appears to be.

The odds that Westeros’ last ruling king Robert Baratheon’s illegitimate son — who rowed off to sea in season 3 and didn’t return until season 7 — will ultimately take the throne have vacillated wildly, with Gendry currently sitting in sixth place. While he hasn’t expressed any desire to follow in his father’s footsteps, his lineage (and the writers) could have other plans for him.

The often-underestimated, wise-beyond-her-years tomboy has proved to be a ruthless assassin, racking up a lengthy “kill list” as she’s sought to avenge the murders of her family. She’s motivated by revenge rather than a desire to rule, which makes her a likely candidate to get rid of the heartless Cersei Lannister, the current queen of the Seven Kingdoms — but several theories suspect Arya would destroy the throne if she did ultimately claim it.

Cersei’s brother currently has better odds than the reigning queen herself for ending up on the throne. Having forged strong alliances with many key players on the good side, his taking the throne would be one of few options for a somewhat-unified kingdom. Plus, there are fan theories that he’s actually a Targaryen, stemming from his father’s refusal to acknowledge him as his heir and Daenerys’s dragons acceptance of him. Known for his sharp wit, fierce bravery and fluctuating moral compass, Tyrion has a fair shot — at least with a crossbow.

As Jon Snow’s closest confidant, Samwell Tarly may seem an unlikely contender for the throne. More bookish than brave, he provides key insight and intelligence as a steward in the Night’s Watch and their battle against the White Walkers, but fans suspect there may be more to him beneath the surface. Their theories speculate that he could be the reincarnation of Azor Ahai, the Prince Who Was Promised and who will once again save the realm from the White Walkers.

Oddsmakers currently have the Onion Knight as the least-likely victor, which means he might actually have a shot, considering the series’ penchant for plot twists. Azor Ahai theories abound in the GoT fandom, and some suspect that Stannis Baratheon’s former right-hand man might just be the guy to fulfill the prophecy.