Bill Turnbull and Susanna Reid welcomed journalist Olivia Petter on to Good Morning Britain for a debate over a 26 foot tall Marilyn Monroe statue that some people have branded misogynistic. On Wednesday morning’s show, Olivia criticised the statue and claimed it was encouraging up-skirting. However, host Bill hit out claiming there was no evidence to support that.

Bill asked: “Is it then the pose or is it the or the fact that it is a 26 foot tall representation of the pose that is offensive, Olivia?”

“Well I think it’s a combination of the two,” journalist Olivia responded.

She continued: “You know, thinking about the pose for starters obviously if we look at Marilyn’s character in that film she is completely an object of male desire she has no autonomy she is purely a sexual object.

“So, while that film is a very famous film and Marilyn was an icon, it’s very of its time. 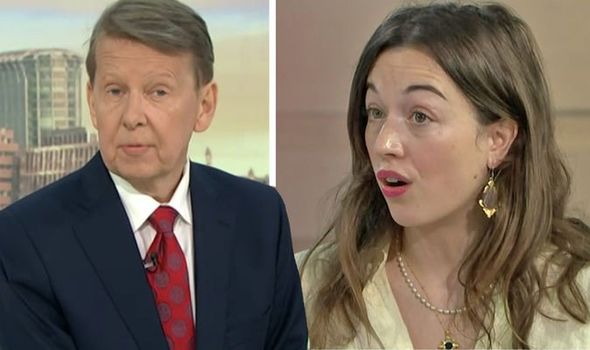 “But I think the real issue here is the fact that it’s a 26 foot tall statue that encourages tourists to run in between her legs and take a photograph under the woman’s dress.”

“That is incredibly offensive and wildly out of touch when we consider that up skirting is a serious crime with seriously psychological consequences for victims,” she added.

Bill later hit out at Olivia’s claims over people up-skirting the statue, saying: “There’s no evidence this is the case.”