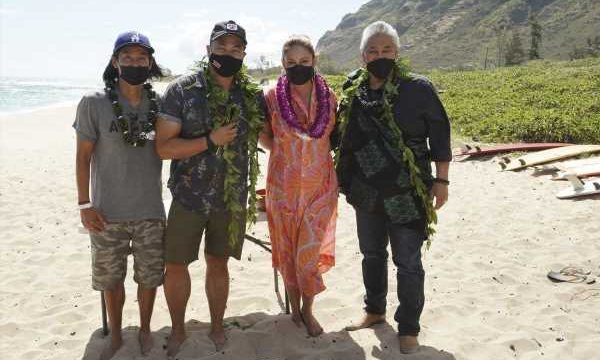 NCIS: Hawai’i is coming soon to CBS as the newest Navy police procedural in the network’s top-rated franchise. The series will star Vanessa Lachey as Jane Tennant, the first female lead in the NCIS universe.

Executive Producer Larry Teng is directing the first few episodes. The team from the now-canceled NCIS: New Orleans has also moved to the Aloha State as the spinoff’s executive producers. The cast and crew started filming last month, and Teng has just offered up a major update on the first two episodes.

The new team on ‘NCIS: Hawai’i’ is based at Pearl Harbor

According to Express, Lachey’s Jane Tennant will be in charge of the NCIS team that is located at Pearl Harbor on the Island of Oahu, known as NCIS: Pearl. CBS describes Lachey’s character as “diplomatic as she is hard-charging.”

She is also a “master” juggler of balancing her professional and family life.

Lachey will star alongside Yasmine Al-Bustami and Jason Antoon as her fellow agents Lucy and Ernie. Noah Mills, Tori Anderson, Kian Talan, and Alex Tarrant also have main roles. Enver Gjokaj has also been cast in the recurring role of Joe Milius, a high-ranking Navy Captain, and commander of the Pacific fleet.

Mills stars as Jesse Boon, a former Washington DC homicide detective who joins the NCIS: Pearl team as a special agent. He will reportedly be Jane’s second in command on the team’s missions, as well as her close confidant.

The series’ location will also be an important character

Anderson stars as agent Kate Whistler, a defense intelligence specialist who becomes an NCIS special agent. While Tarrant plays Kai, another new agent who has returned home to Hawaii to care for his father. Talan will play Jane’s oldest child, Alex.

According to showrunner Christopher Silber — who comes from the NOLA spinoff — the Hawaii location will also be a major character on the series. This was something he learned from fellow EP Jan Nash during their time in the Big Easy.

“What I took away and learned from working with Jan the last couple of years, in New Orleans, is really getting to know the place that you’re shooting and making it a character in the show,” Silber said.

The cast and crew started filming the first episodes of NCIS: Hawai’i in early July. Teng gave an update on their progress in an Instagram post. He revealed that the first two episodes are officially in the can.

“After 22 days of filming, I can officially say that the pilot and episode 102 for @ncishawaiicbs is wrapped” Teng wrote. “I feel so lucky to collaborate with this amazing cast, this amazing group of producers, and more than anything, this amazing crew. They have held me up, worked long hours, and devoted their time, sweat and talents for this maiden voyage. It’s been an unforgettable experience. Mahalo for allowing me to be a part of this incredible ohana.”

Teng has been keeping his 15k followers up-to-date on all things NCIS: Hawai’i on his Instagram. He’s given sneak peaks of filming locations, and also gave fans a look at the filming of a tense underwater scene.

In the caption of a photo of Lachey, Tennant thanked the Navy and Airforce for allowing them to film at Joint Base Pearl Harbor Hickam. In another post, Teng shared a video of the unveiling of the “million dollar set” of NCIS: Hawai’i headquarters.

In a third post, Teng shared a photo of Lachey and Tarrant from a recent shoot. He’s also given fans a peek at the show’s “fabulous stunt team.”

Teng shared a scene of a police raid and a scene that features a massive crash.

Fans won’t have to wait too much longer to see the first episodes of the new series. CBS has announced that NCIS: Hawai’i will premiere on Monday, September 20. It will take the 9:00 pm EST time slot NCIS. CBS decided to move the flagship series out of the Tuesday night time slot it held for 18 seasons.