[Editor’s Note: The following interview contains spoilers for the Netflix series “Murder Among the Mormons.”]

There’s an overwhelming sense of unease right from the start of “Murder Among the Mormons.” Shannon Flynn, sitting in a chair and speaking to interviewers just off-camera, very politely asks that he not answer a particular question. It takes until the end of the three-part documentary series to find out what led to that reaction, but directors Tyler Measom and Jared Hess explained that feeling was in many ways a microcosm of how many people in the Salt Lake City area still live with the consequences of a series of deadly bombings over 35 years later.

“The first scene is usually one of the last things you put in a movie. In today’s world, in some aspects of streaming, the opening part of the documentary is so important. We want to hook the audience, but you also don’t want to give too much away,” Measom said. “Our editors, Greg O’Toole and Matt Prekop, they put that in and it was just perfect. Seeing this bald dude in a three-piece suit say, ‘I don’t want to tell you’ and then immediately go, ‘I’m telling you’ sets the tone for the rest of the of the series.”

As fitting as that opening is, participants like Flynn are far from pawns in the retelling of what happened in October 1985 in a trio of explosions orchestrated by counterfeiter and eventual convicted murderer Mark Hofmann. In order to deliver a thorough account of events that captures the full spectrum of uncertainty that led up to the tragic deaths, Measom and Hess had to build up trust with Hofmann’s former associates, the individuals tasked with determining his guilt, and other people his actions shook.

“Before we interviewed these individuals, Jared and I spent years going to lunch with these people, meeting with them, hanging out with them, talking to them,” Measom said. “Once you sit down with somebody in a calm setting, and you prepare them for this interview, and you spend four or five or six hours just hearing their tale and having them talk it out, and directing them to try and get the best story out of them, you can really feel someone’s pain. You can see someone’s emotion. People aren’t used to talking and not having someone respond instantly and immediately. For a lot of these subjects, it was very therapeutic to go into this event.”

There are many ways that “Murder Among the Mormons” could have structured its timeline. By saving the reveal of Hofmann’s history as an antiquities forger until the second episode, the series takes a more chronological approach. For those who didn’t live through those terrifying few days or previously know about the unpredictable saga that played out in their aftermath, the documentary largely aligns the viewer with what people knew as it was unfolding. 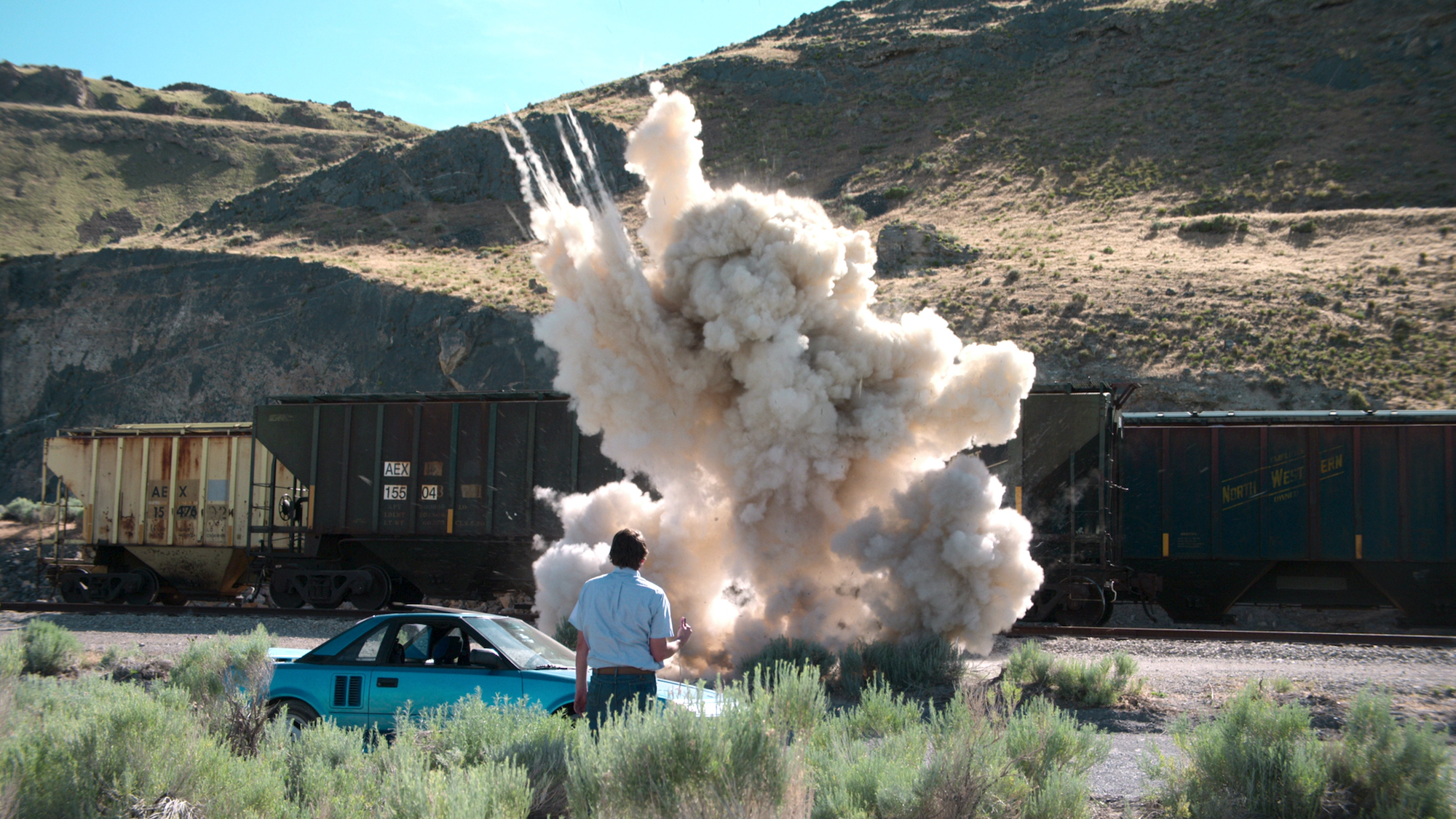 “Murder Among the Mormons”

“We really wanted to put the viewers in 1985. All the people that were close to him who had no idea that he was a forger, that he’d been deceiving them for years. We wanted the audience to experience that as well, to not know that he was the bad guy. Experiencing the surprises and twists and turns as they did was just the way to go,” Hess said.

In telling this story with some distance, Measom and Hess were fortunate that many of the people they spoke with on camera were involved in the local media coverage at the time. In the passing of an entire generation, you can see how some people have or haven’t changed in the intervening years. Given that the bombings were both an all-consuming local story and one that gained national attention, “Murder Among the Mormons” has the benefit of not just relaying how people say they felt in that moment, but having extensive video proof of it, too.

“We were lucky enough that a lot of the people who were involved in it kind of knew that this was a historical moment,” Measom said. “So when we met with them, they’d turn over boxes of stuff, just so much material from that era. Newspaper clippings and photos and documents and journals and VHS tapes of news at the time. Digging into that time capsule of the period was really helpful in telling the story, because it did put us in that time. It relayed the panic that happened within Salt Lake City during that bombing period.”

The local news footage makes up a lot of the connective tissue of the series, but there are dramatic recreations of key events throughout each of the three episodes. Rather than just be aesthetic filler, Measom and Hess really wanted to make sure that the details of these small windows into the past were as specific as possible.

“We had our production designer, Jonas Sappington, build Mark’s workshop — which was also Mark’s basement, his childhood bedroom — to the specifications we could find from the photos of the crime scenes that they took. When we drove the car, we parked in the exact spot where he blew himself up. So this melding of general authenticity with narration and narrative was fun. It was really enjoyable to kind of blend those two together,” Measom said. 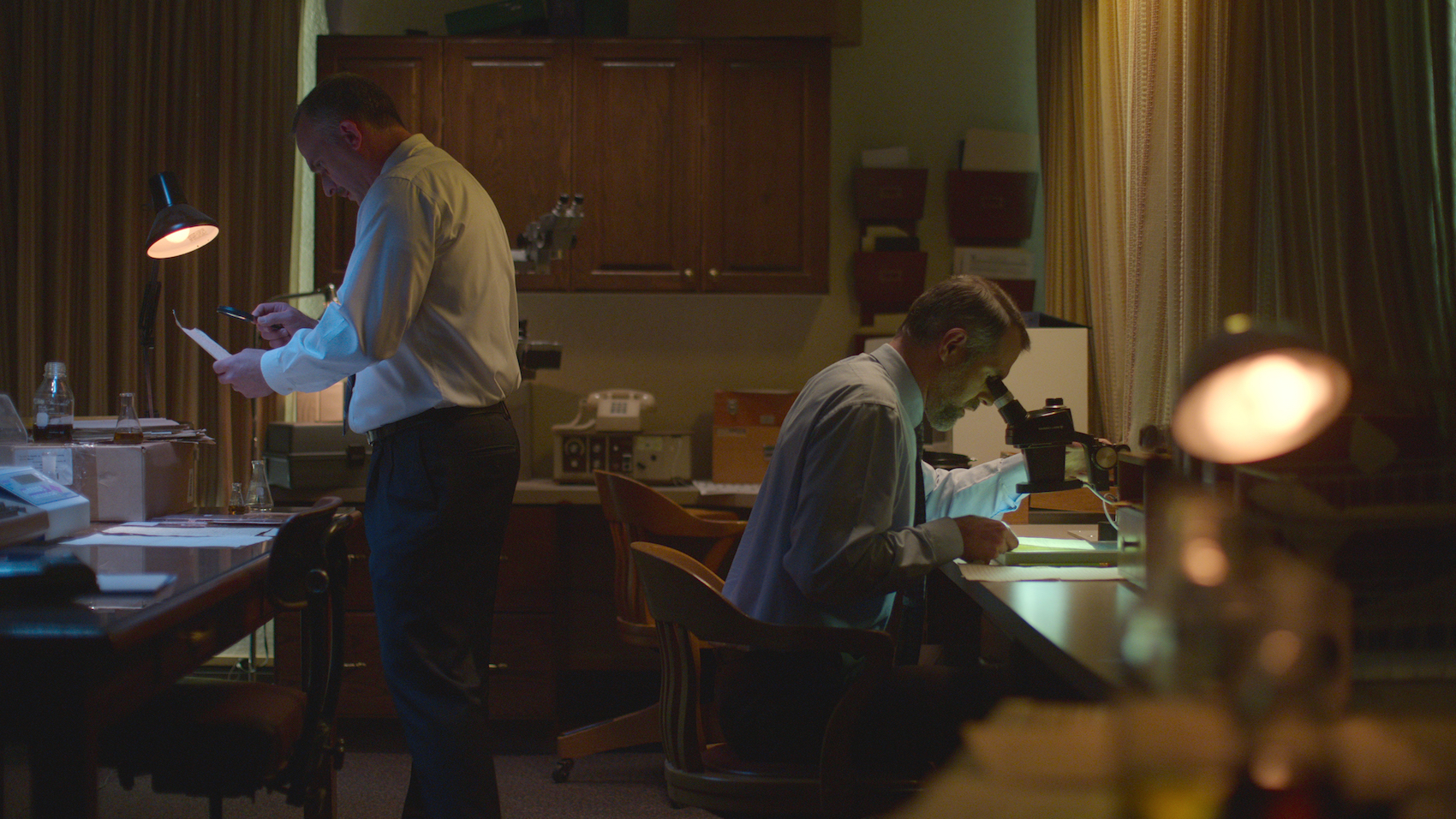 “Murder Among the Mormons”

One of the trickier aspects of the series is establishing a tone that’s not only appropriate for the emotional vulnerability of its subjects, but that acknowledges all of the competing emotions throughout all three episodes. There’s a feeling of excitement early on when it seems like Hofmann’s discoveries were genuine. There’s even a bit of humor sprinkled throughout, however dark the ensuing events do make it.

The documentary’s in-person interviews were conducted in the early months of 2020, right before lockdown measures were put in place. Working with composer Joel Goodman to help zero in on the specific emotional atmosphere for “Murder Among the Mormons” was one of the biggest challenges of finishing the project once the final stretch turned to a remote endeavor.

“Neither Tyler nor myself have ever had to work with a composer over Zoom, but we adapted,” Hess said. “We spent a lot of time really experimenting with the tone for various scenes. We just wanted the music to support the emotion and the stakes of what was happening at any given moment.”

There’s a certain kind of thematic resonance to Hofmann’s story that Measom also found in making his 2014 film “An Honest Liar.” As someone who tracked the life and career of master illusionist James “The Amazing” Randi, Measom noticed plenty of similarities in how Hofmann was able to pull off his many initial deceptions.

But of course, being a skilled storyteller can have a sinister side. In showing how Hofmann’s abilities in that area brought destruction into so many lives, “Murder Among the Mormons” subtly connects that damage to a greater societal trend that persists decades later.

“We live in a world of misinformation and nobody is immune to deception,” Hess said. “We all have to take a deep close look at the stories that we choose to believe. All of those things that occurred with this Mark Hofmann saga are relevant now, more than I think they’ve ever been.”

“Murder Among the Mormons” is now available to stream on Netflix.