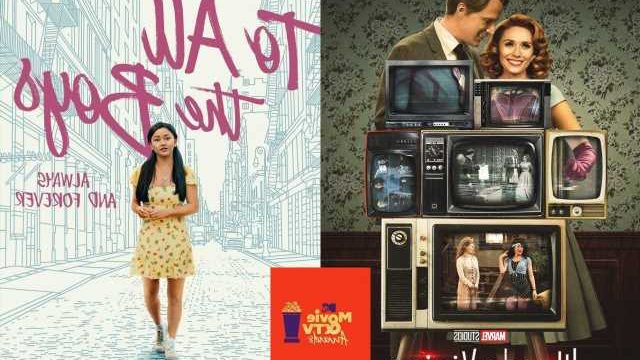 Additionally, late actor Chadwick Boseman is posthumously honored with the Best Performance in a Movie thanks to his portrayal of Levee Green in ‘Ma Rainey’s Black Bottom’.

AceShowbiz -The Golden Popcorn is ready! Taking place at the Palladium in Los Angeles on Sunday, May 16, the 2021 MTV Movie & TV Awards had announced its full winners from both Movie and TV categories. This year, “WandaVision” led TV nominations alongside “Emily in Paris” and “RuPaul’s Drag Race“. As for the film nominations, “Judas and the Black Messiah” and “Borat Subsequent Moviefilm” were among the frontrunners.

As “The Falcon and the Winter Soldier” was one of the highly-anticipated TV series, it was no surprise that Anthony Mackie, who plays the Falcon on the series, was named as the winner of Best Hero this year. The Marvel actor edged out Gal Gadot (“Wonder Woman 1984)”, Jack Quaid (“The Boys“), Pedro Pascal (“The Mandalorian“) and Teyonah Parris (“WandaVision“).

Fellow Marvel star Elizabeth Olsen was also honored with a trophy. The Wanda Maximoff depicter won the Best Performance in a Show. She successfully won over fellow nominees including Anya Taylor-Joy (“The Queen’s Gambit“), Elliot Page (“The Umbrella Academy“, Emma Corrin (“The Crown“) and Michael Coel (“I May Destroy You“).

The Best Kiss award, meanwhile, went to “Outer Banks” stars Chase Stokes and Madelyn Cline. As for the Best Comedic Performance, it was given to host Leslie Jones for her performance in “Coming 2 America“.

Elizabeth Olsen wasn’t the only “WandaVision” star who came home with trophies. Kathryn Hahn was chosen as the winner of Best Villain for her portrayal of Agatha Harkness. The fight between Wanda and Agatha was also named as the Best Fight. The Disney+ series was also the winner of this year’s Best Show. Meanwhile, Rege-Jean Page took home the award for the Breakthrough Performance thanks to his role of Simon Bassett on Netflix’s “Bridgerton“.

In the movie department, Chadwick Boseman was honored with the Best Performance in a Movie thanks to his portrayal of Levee Green in “Ma Rainey’s Black Bottom“. “To All the Boys: Always and Forever“, meanwhile, was named as the Best Movie, edging out “Borat Subsequent Moviefilm”, “Judas and the Black Messiah”, “Promising Young Woman” and “Soul“.