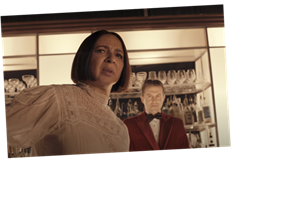 The border between the Overlook Hotel and Studio 8H blurs in a clever sketch from this week’s episode of “Saturday Night Live,” hosted by Maya Rudolph. “The Maya-ing” is a warm and endearing sketch, despite riffing on a very icy and unsettling movie, that brings a handful of “Saturday Night Live” alumni back into the fray, including Tina Fey (standing in for the caretaker who is Jack Nicholson’s predecessor in “The Shining”), Kristen Wiig (as the spooky twin girls), and Rachel Dratch (as the bathtub lady). Watch it below.

The sketch ends, like the movie “The Shining,” by zooming in on a black-and-white photograph, with Rudolph inserted among the show’s original cast members of yore including Dan Aykroyd, John Belushi, Gilda Radner, and more.

Throughout the night’s episode, Rudolph reprised some of her most iconic portrayals, including Beyonce (suffering through an episode of “Hot Ones” while eating diabolically hot chicken wings) and, of course, Vice President Kamala Harrris.

Rudolph joined a lineup of hosts this season including John Krasinski, Dan Levy, Regina King, Regé-Jean Page, and Nick Jonas. Next up pulling emcee duties will be 2021 Academy Awards contenders Daniel Kaluuya (looking to win Best Supporting Actor for “Judas and the Black Messiah”) and Carey Mulligan (up for Best Actress for “Promising Young Woman”).

During last night’s episode, Jack Harlow performed as the musical guest medley, with Adam Levine also appearing at one point alongside the performer.

Another highlight from the week’s episode found Bowen Yang addressing recent anti-Asian sentiments while appearing on “Weekend Update.” “I can’t address any of this without bringing up class or gender or imperialism. I don’t even want to be doing this update piece. I wanted to do my character, Gay Passover Bunny, but it’s too smart for the show. I’m just a comedian, I don’t have the answers, but I’m not just looking for them online: I am looking around me,” he said. “In Mandarin, there’s a cheer that basically means ‘fuel up.’ I don’t know what’s helpful to say to everyone, but that’s what I say to myself. Fuel up. Do more. it’s the year of a metal ox which basically means a car, so everyone get in, buckle up, it’s no pee breaks, we ride at dawn, grandmas.”