It’s been (mind the pun) “A New York Minute” since Mary-Kate and Ashley Olsen co-starred in their last film (of the same name) in 2004. The twins’ soaring entertainment career since achieving notoriety as “Full House’s” Michelle stumbled in 2003 when the two announced they would attend New York University in 2004, with Mary-Kate ultimately taking a leave of absence the following year, per People. Additionally, Mary-Kate underwent a brief treatment for an eating disorder, per ET, in 2004 as well. As her representative told People, the decision to drop out was solely so “she can … pursue personal interests” and was unrelated to her health.

Ashley also departed NYU in 2007, quitting acting as well. She told Elle U.K. (via HuffPost) in 2012, “I don’t have to be a pretty face. I’ve done that, but now … I don’t like to be the center of attention anymore.” Mary-Kate did continue acting for a bit — with a recurring stint on Showtime’s Weeds as well as a well-praised cameo in 2008’s “The Wackness.” Since those, her thespian journey seemed to conclude as well. Other than the public interest in their love lives, the twins have largely only resurfaced in the news for sister Elizabeth Olsen’s acting success, or for their clothing lines Elizabeth and James (named after their siblings, per The New York Post) and The Row.

In June, the twins gave a rare interview about living life since transitioning to full-time fashion designers. Here is what they shared.

Mary-Kate and Ashley Olsen are happy being 'perfectionist' fashion designers 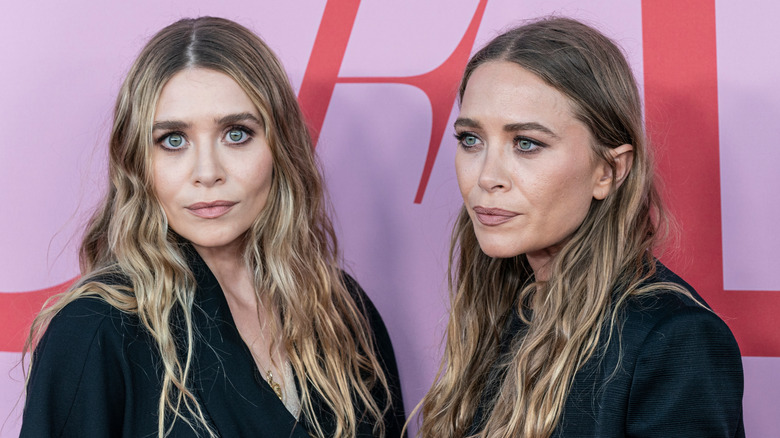 According to twin wonders Mary-Kate and Ashley Olsen, their fashion line The Row innately reflects their “discreet” natures. Speaking to i-D in June about their high-end line, Mary-Kate disclosed, “We were raised to be discreet people” with Ashley chiming in that “potentially that’s just our aesthetic, our design preference.” Known for their audaciously boho-chic outfits of the 2000s (as detailed in Vogue), Ashley emphasized that their minimalistic fashion DNA still allows them to “appreciate something truly ornate or maximal.” With The Row consisting of solid-and-neutral-toned, streamlined pieces like this beige pencil skirt, Ashley explained that the design process can start with something more garish “and then gets pared down.”

Unlike Sofia Jeans by Sofia Vergara or KKW Beauty by Kim Kardashian, the lifelong showbiz veterans always avoided associating their own names with The Row or with their previous line, Elizabeth and James. “We didn’t want to be in front of it, we didn’t necessarily even want to let people know it was us,” Ashley added. “It was really about the product.”

Appreciating the lack of personal scrutiny fashion afforded them, the designers also enjoyed the freedom this allowed to improve their work with relative anonymity. Describing her and Ashley as “perfectionists,” Mary-Kate told i-D, “I think the reason we do fashion is to constantly try to fix our imperfections. And you have next [fashion] season to do that … Just evolving and learning.”

If you or someone you know is struggling with an eating disorder, please contact the National Eating Disorder Association’s Helpline at 1-800-931-2237 or chat with one of their helpline volunteers on NEDA’s website.