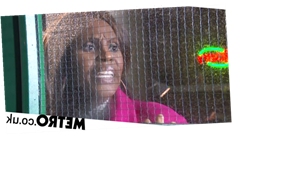 Toby Faroe (Bobby Gordon) resorts to violence once more in Hollyoaks, and this time his intended victim is none other than mum Martine Deveraux (Kelle Bryan), but will he succeed in killing her?

Toby has been on could nine as a result of his burgeoning romance with Cleo McQueen (Nadine Mulkerrin).

Celeste (Andrea Ali) is delighted with her brother’s progress, and believes Cleo to be the perfect calming influence for him.

However, Martine is determined to protect her boy, and therefore she ask Cleo to take things slow, as Toby is a virgin.

Cleo is taken aback, and Toby is fuming when he discovers what his mum has done. He storms round the garage in a fit of rage, leaving Felix Westwood (Richard Blackwood) certain that something needs to be done about him.

Toby later sees sense, and reveals that he regrets how he treated Cleo and promises to make things up to her, get through the counselling sessions required when donating a kidney, and ultimately save Walter’s (Trevor A Toussaint) life.

However, during the therapy session, Toby comes to believe that the counsellor has brought a copy of The Red Door with her and therefore he explodes.

Little does he know, that the book actually belongs to Felix.

Meanwhile, Walter is rushed to hospital, leaving Martine devastated. Toby finds her upset and lies — claiming that the counselling session went fine, so he’ll be able to help with Walter’s kidney transplant.

Fed up of all the questions, Toby snaps, and locks Martine in the garage.

Celeste is perturbed to find her brother pulling down the shutters, and when she enquires about what he’s up to, Toby tells her that he’s going to kill their mum!

Martine is trapped in the garage, as Toby splashes petrol around the building — leaving Celeste in shock.

Will Toby kill Martine? Or will Celeste be able to talk him round?