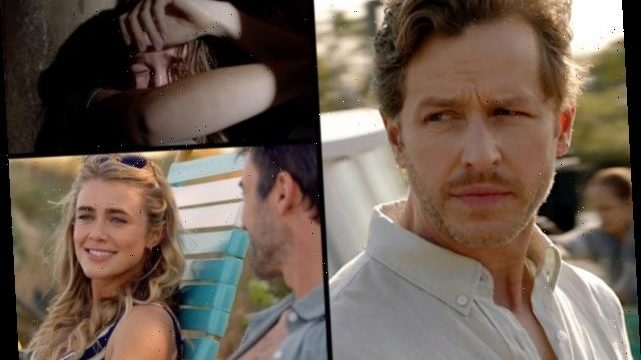 Ben Stone is a man on a mission in the opening minutes of Manifest Season 3, which were played for the WonderCon crowd this Saturday and now can be watched exclusively on TVLine.

In the sneak peek below, we see Ben (played by Josh Dallas) snooping around Havana, looking for a boat that popped up in one of Cal’s drawings, and is already familiar to viewers. But just as Ben makes progress, one of the most intense callings yet simultaneously hits him, Cal (who is back home) and Michaela (who is honeymooning in Costa Rica with Zeke).

What does this frightful new calling mean, and who is the mystery woman sharing it with the Stones? Press play below to watch the opening five minutes of Season 3 (premiering this Thursday, April 1 at 8/7c on NBC), which also features a sliiightly new title card, plus the debut of The Americans‘ Holly Taylor as Angelina, an “integral” new 828er.

“I think that the audience is going to feel satisfied in that this is a very eventful season,” showrunner Jeff Rake recently told TVLine. “I know that at times in Season 1 or Season 2 was the show was accused, with love, of not moving the ball forward enough, that the burn was too slow. Well, my strong suspicion is that Season 3 will not be accused of that. There is a lot of forward momentum, a lot of card turns, and a lot of big surprises. It will be a very satisfying experience for people who are anxious for stuff to happen.”

Watch the sneak peek here, and the full WonderCon panel down below (where I hit the cast with several reader questions).

On the casting front: In addition to Taylor’s debut, Will Peltz (Euphoria) will recur as Levi, a teaching assistant at the university where Ben works whose expertise in archeology brings him in contact with Olive (Luna Blaise); Warner Miller (Marvel’s Luke Cage) will play Tarik, Grace’s (Athena Karkanis) estranged stepbrother who reluctantly agrees to help the Stones when they have nowhere else to turn; Mahira Kakkar (BBC’s A Suitable Boy) will recur as Dr. Aria Gupta, a researcher studying the phenomena surrounding Flight 828; and Ali Lopez-Sohaili will play Eagan Tehrani, a passenger whose photographic memory proves to be a major asset.

Want scoop on Manifest, or for any other show? Email [email protected] and your question may be answered via Matt’s Inside Line.