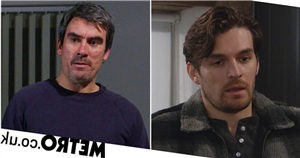 Mackenzie Boyd (Lawrence Robb) has some firm words of advice for Cain Dingle (Jeff Hordley) in the latest Emmerdale spoiler video, as he tells his brother-in-law he needs to sort himself out or he risks losing everything.

Cain is hungover and is on the phone to Moira (Natalie J. Robb). They’re talking about Matty (Ash Palmisciano) and Cain says he was wrong to get him to move out. He says he was angry and Matty was ‘pushing all the wrong buttons.’ It’s clear that once again Cain has let his temper get the better of him and Moira hangs up on him, not willing to listen to his excuses.

At that point Mackenzie comes in and says he wants to help. He points out that Cain’s current behaviour isn’t helping Kyle (Huey Quinn). He says he doesn’t like Caleb (William Ash) either but the fact he’s got Kyle released means he’s helping.

Cain can’t cope with the fact that, in the family’s eyes, Caleb is a hero who’s fixed everything. ‘Kyle could still go down,’ he frets. ‘He needs me.’

Mackenzie says that Kyle needs to obey the conditions of his bail, which presumably means not seeing his dad. He tells Cain he has to stop lashing out otherwise he’ll risk losing even more.

‘Gallon of water, big dirty fry-up, sort that head out – and pull yourself together, man,’ is his advice.

Cain looks like he’s thinking about it – but will he take Mackenzie’s words on board?