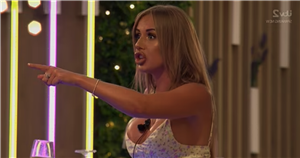 Love Love Island? Our Factor 50 email brings all the goss direct to your inbox

Love Island viewers have hit out at Faye Winter by complaining about her behaviour to Ofcom after she was seen shouting at Teddy Soares in the latest instalment of the show.

A string of revelations during movie night left Faye, 26, finally seeing the extent of 26 year old Teddy's flirting with Clarisse Juliette, 24, and she was utterly livid.

For the rest of the night, the blonde beauty was called "childish" by Teddy for giving him the middle finger and shouting at him, claiming he lied to her about his antics in Casa Amor.

"I know what I'm worth," Faye told the financial consultant. "We're done," and an upset Teddy slung Faye's ring back to her as they parted ways.

Fans of the hit ITV dating show have since taken to Twitter to voice their concerns over Faye's behaviour and have shared that they've lodged complaints to government watchdog Ofcom.

"I urge all to place a complaint to ofcom. This should never have aired and Faye should be removed #getfayeout #LoveIsland," one person wrote.

Another chimed: "Caught up on yesterday's loveisland episode and that was not acceptable to have aired. The drama created and manipulated by the producers for entertainment purposes, at the expense of the contestants' welfare are not acceptable. Ofcom complaint sent."

While a third agreed: "Nah don’t even care, I’ve made a complaint to ofcom #GetFayeOut #LoveIsland".

However, others thought complaining to Ofcom was a little extreme as one person said: "I can't believe people are complaining to ofcom about faye and calling her abusive honestly #LoveIsland".

Another called out people who couldn't handle either extremes of the show as they commented: "Winter love island had some of the most nicest contestants but people complained there wasn’t enough drama. The producers then feel compelled to stir the pot and people cry ofcom. So what do people actually want? Cant have it both ways! #LoveIsland".

As a third added: "ppl really be writing to ofcom about Faye loool #LoveIsland".

Many thought the duo were going to win this year's series with questions remaining about the integrity of 24 year old Jake Cornish's feelings for Liberty Poole, 21.

Yet Faye had already been questioning if she and Teddy "matched" and if he would get on with her mum and dad in the outside world.

Speaking to the girls on the terrace one morning, the blonde contestant admitted she was worrying over their differing tastes in music too.

However, the truth ended up with Faye admitting to her friends that she didn't think she was good enough for Teddy deep down.

For all your updates on Love Island, sign up to our Factor 50 newsletter.