Prince Harry and Meghan Markle held hands while leaving Westminster Hall on Wednesday while other members of the Royal Family looked stoic in their grief. Lorraine Kelly praised the Duchess of Sussex for “supporting” her husband while discussing the Queen’s service with royal expert Jennie Bond.

“And on the way out [of the service] quite instinctively he held hands with his wife as he should.

“I don’t think there’s anything wrong with that. He obviously needed the support from Megan and it was there.”

Jennie replied: “It’s almost their trademark, isn’t it? They always work hand in hand, and it’s lovely to see. 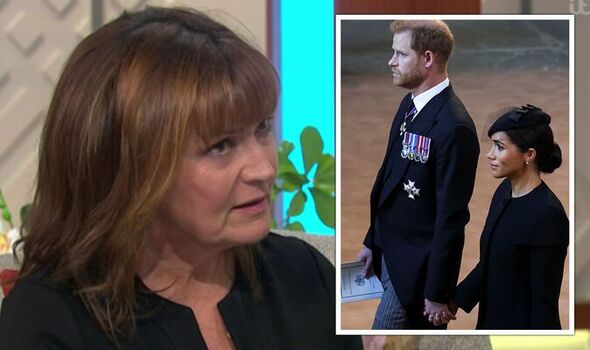 “I don’t see why anyone should stand on protocol even at grand occasions like this.

“So she is there supporting her husband. I think actually, Catherine also quietly stroked William’s arm, they’re supporting their husbands who are united in grief and Harry always has been the more emotional I suppose.”

Zara Tindall and her husband Mike also held hands as they exited the service.

Jennie went on to reflect on Harry’s birthday with the Duke of Sussex turning 38 on Thursday.

“Another sad birthday for him, again he will think back 25 years ago when he was just 13, a week or two after his mother died and now he’s 38 today,” she noted.

Elsewhere in the interview, Jennie spoke about King Charles III and remarked: “As I’ve said many times, the instant the Queen dies [Charles] is King it will happen.

“Now it has happened and he seems to be being received with great affection which pleases me.”

Lorraine interjected: “He’s got someone by his side who again is somebody who sometimes gets overlooked, Princess Royal Princess Anne, and I’m sure she’s going to play an even even bigger part in his life.

“She’s going to be surely one of his most trusted advisors, I would think, maybe not in an official way but she’ll be there helping them.”

“Hasn’t it been moving to see the way the princess has behaved in these past few days as a daughter would accompanying her mother every step of the way?” Jennie replied.

“And honestly, we have these rituals and ceremonies, we had the pageantry which has been laid down in a blueprint for decades exactly what would happen minute to minute.

“But sometimes I think it’s the unscripted moments that speak most loudly and one for me was when the Princess Royal, Princess Anne, dropped that deep, deep curtsy as her mother’s coffin arrived back at Holyrood Palace.