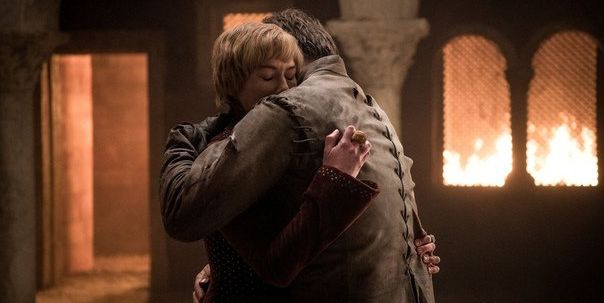 [This post contains spoilers about Game of Thrones season eight.]

I understand that hardcore fans are pretty disappointed with last night’s episode of Game of Thrones. Daenerys’s character arc is currently taking the shape of James Charles’s subscriber count, and Cersei got the least entertaining death in television history. It’s a mess. But, if you’re the kind of viewer who is really just here for the memes (it me), the episode did not disappoint. I really thought the Starbucks cup was going to be the meme-peak of the season, but it appears we have been blessed with another editing blunder.

While the rest of the world was busy freaking out that the Lannister twins were really about to be killed by a bunch of rocks, the most observant viewers realized that Jaime’s formerly chopped off hand was back. In case you forgot…he lost that hand in season three after pulling a “do you even know who I am?” to save Brienne of Tarth from a group of soldiers.

So yes, this is a very yikes mistake. I genuinely cannot decide if it’s more or less forgivable than the great Starbucks cup cameo. Like…Jaime’s hand has been a thing. Someone should have caught this.

It goes without saying that this oops is total internet gold. Although, reactions have been mixed. Some people are finding it totally hilarious, while others are heated over this season’s lack of attention to detail.

For those who are defending D&D after this episode, explain to me why Jaime’s hand grew back…

THIS SEASON IS THE WORST EVER, IN EVERY WAY! NOW FUCK OFF @GameOfThrones @HBO pic.twitter.com/LnunDhIOfc

jaimes hand really grew back for cersei wow his power

TBH, all of these editing flubs make me even more upset that Game of Thrones is ending. Like, imagine the memes we could have seen if this mess went on for another full season? Obviously, next week is the series finale, but I’m keeping my fingers crossed for at least one more of these iconic mistakes. I mean, what might we be spoiled with next? Will Sansa be spotted rocking AirPods? Will Arya call an Uber Pool instead of hopping on a horse? I can’t wait.